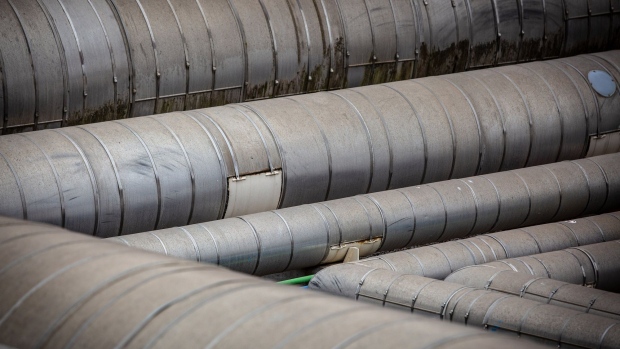 Gas pipes at the Enagas SA storage and distribution hub at the Port of Barcelona in Barcelona, Spain, on Tuesday, March 29, 2022. , Angel Garcia/Bloomberg

(Bloomberg) -- Shares of Japanese trading houses dropped after President Vladimir Putin signed a decree to transfer the Sakhalin-2 natural gas plant to a new Russian entity, a move that could force the companies to exit their investment in the key energy project.

Mitsubishi Corp. and Mitsui & Co., which own a combined 22.5% of the Sakhalin project, both tumbled. Mitsui fell as much as 5.3%, while Mitsubishi declined 5%.

The decree cited threats to Russia’s national interests and economic security, according to a statement dated June 30, issued by the Kremlin and signed by Putin. Stakeholders have one month to say whether they’ll take stakes in the new company, the statement said.

Japanese LNG buyers, including Tokyo Gas Co. and Osaka Gas Co., also fell. Liquefied natural gas from the Sakhalin 2 plant accounted for about 9% of Japan’s total LNG imports in 2020, or about 3% of the nation’s total power supply, according to government data.