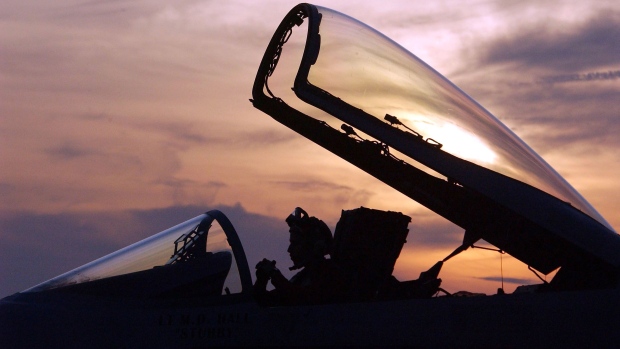 USS CONSTELLATION - JANUARY 15: A U.S. Navy flight crewman works in the cockpit of a U.S. Navy F/A-18 Hornet after returning to base aboard the USS Constellation January 15, 2003 which is currently in the Persian Gulf area. The Hornets are flying patrol missions in the Iraqi southern no-fly zone in support of Operation Southern Watch. (Photo by Scott Nelson/Getty Images) , Photographer: Scott Nelson/Getty Images North America

(Bloomberg) -- Britain and Italy agreed to merge plans for a next-generation warplane with a parallel project in Japan, in a bid to bring a new fighter into service by 2035 amid heightened tensions with Russia and China.

The deal to create the Global Combat Air Programme, announced Friday, effectively combines the European Tempest and Japanese F-X projects, both of which have been in the pipeline for years.

While financial commitments have yet to be hammered out, fighters are among the most costly of defense projects. Time-frames can run to decades and budgets into hundreds of billions of dollars, so that adding Japanese financial clout to European know-how honed on a succession of jets culminating in the Eurofighter represents a major step forward in developing a new a aircraft.

BAE Chief Executive Office Charles Woodburn said work done with MHI since collaboration with Japan was first mooted over the summer has revealed both that the existing programs are sufficiently compatible in industrial and military terms to be merged and that there’s the political will to do so.

The plan marks the first time since World War II that Japan has looked beyond its US ally for a major military partnership, with the move spurred partly by American reluctance to share technology. Long-pacifist Tokyo is preparing to hike its defense budget more than 50% after being spooked by Russia’s invasion of Ukraine.

“The security of the Euro-Atlantic and Indo-Pacific regions are indivisible,” UK Prime Minister Rishi Sunak said in a statement prior to a launch ceremony for the expanded warplane project at the RAF Coningsby Eurofighter base.

Woodburn said joint concepting work with Mitsubishi had gone “incredibly well” in the past few months, with the Japanese company — which built the WWII-era Zero but has seen fighter work confined to building US-derived models in recent decades — demonstrating its depth of engineering ability.

The CEO said his personal view is that the GCAP program has “enough partners” and a strong enough industrial base to go ahead without the addition of others, though Saab AB of Sweden, which currently makes the Gripen fighter, remains a possible recruit.

Woodburn said in a phone briefing that any collaboration with a rival fighter model being developed by France’s Dassault Aviation SA and the German arm of Airbus SE, which is currently partnered with BAE and Leonardo in Eurofighter, would be a decision for politicians.

The Franco-German project, launched after Britain voted to quit the European Union, suffered a long hiatus but has recently moved forward after Berlin and Paris reached an industrial and political agreement handing Dassault the leading role. The plane is due to enter service about five years after the GCAP.

The US supports the GCAP plan and is working with Japan on autonomous systems that could complement it, according to a separate joint statement. Interoperability of the new fighter with the US, NATO and other partners would be a central concept.

The structure of the program, as well as the division of manufacturing and ownership, still needs to be laid out. Participants are working on a split with each country taking a third stake, people familiar with the situation said last week, though negotiations are ongoing.

Previous reports suggest the UK has pledged to invest more than £2 billion ($2.5 billion) over the next three years, while Italy committed a similar amount over several years as part of defense spending plans agreed last year. Japan’s Ministry of Defense has requested ¥143 billion ($1.1 billion) for its next-generation fighter jet for the year starting in April.

The new program will include capabilities such as uncrewed aircraft, advanced sensors and cutting-edge weapons, according to the UK statement. The three countries will work to reach the development phase of the project in 2025.

--With assistance from Keiko Ujikane and Alberto Nardelli.