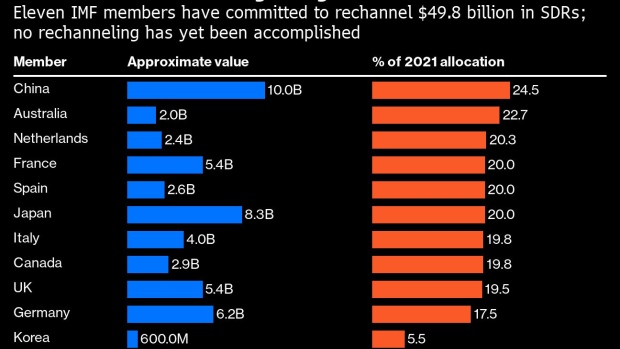 Akinwumi Adesina, president and chairman of the African Development Bank (AfDB), during an interview in New York, US, on Thursday, Sept. 22, 2022. Adesina said Nigeria needs help from the international community in tackling its debt burden. , Bloomberg

(Bloomberg) -- Japan, France and the UK are among five wealthy nations that have shown interest in channeling their rights to International Monetary Fund reserve assets to Africa’s top development lender, which would boost the bank’s ability to support poorer countries.

“We’re getting positive signals about their willingness to consider giving it to us,” African Development Bank President Akinwumi Adesina said in an interview in Bloomberg’s New York office Thursday. “The UK was very clear that they want to do that. Japan has been very supportive in that conversation,” he said, adding that France is leading efforts, while Saudi Arabia and Canada are in talks with the lender.

The IMF’s record $650 billion issuance of reserve assets known as special drawing rights, or SDRs, to its member nations last August went toward helping them with mounting debt and the fallout from the Covid-19 pandemic.

Because SDRs are distributed according to country shares at the IMF, a significant portion go to richer nations that have little need for them. Just $33 billion went to the 54 African nations -- as much as France and Italy combined, and less than half of what the US received.

IMF Managing Director Kristalina Georgieva has urged wealthy nations to redirect some of their SDR allocation to more needy countries and has touted the idea of channeling their support through multilateral development banks such as the AfDB. South African President Cyril Ramaphosa has called on rich nations to donate -- and not just on-lend -- their allotments.

A report released last month by the Washington-based Center for Economic and Policy Research, a progressive think tank, shows just 11 nations have committed to redirect their resources to poorer countries, and no funds have been received.

“We’ve got to be more flexible on how the special drawing rights are used, how to leverage them to deliver greater development impact,” Adesina said, adding that the AfDB can leverage an SDR four times given its AAA credit assessment with S&P Global Ratings.