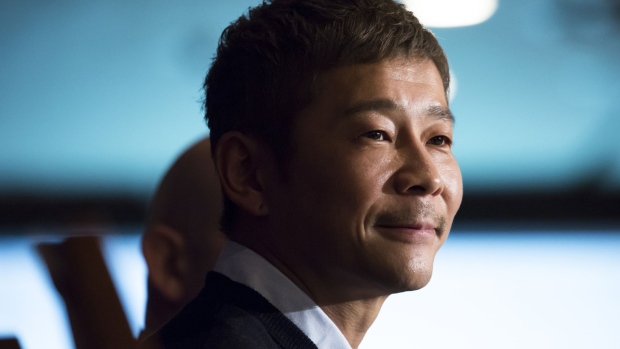 (Bloomberg) -- A tweet from a Japanese billionaire to distribute 1 billion yen ($9 million) to his followers is attracting plenty of attention.

Yusaku Maezawa pledged to give 1 million yen each to 1,000 of his Twitter followers who reposted a message from his @yousuck2020 account. It has been retweeted 4.1 million times since the New Year.

Maezawa, 44, who founded online fashion shopping site Zozo Inc., is used to the attention. He’s already behind the most-retweeted Twitter post after pulling the same stunt last year: 4.3 million and counting. That time, though, he offered just 100 million yen to 100 people.

He isn’t the only one who has promised money to online followers. Democratic Presidential candidate Andrew Yang last year offered $1,000 a month for 12 months to anyone who retweeted him.

Maezawa earned a reputation as one of the world’s biggest spenders, pouring hundreds of millions of dollars into everything from Basquiat paintings to a Hermes-upholstered private jet and a down payment for a ride on Elon Musk’s rocket.

He can certainly afford it. Even after his latest giveaway, Maezawa will have a $3.6 billion fortune, according to the Bloomberg Billionaires Index.

For those suddenly hoping to benefit from Maezawa’s largesse, some bad news. The deadline was Jan. 7.

To contact the reporter on this story: Tom Metcalf in London at tmetcalf7@bloomberg.net

To contact the editors responsible for this story: Pierre Paulden at ppaulden@bloomberg.net, Steven Crabill