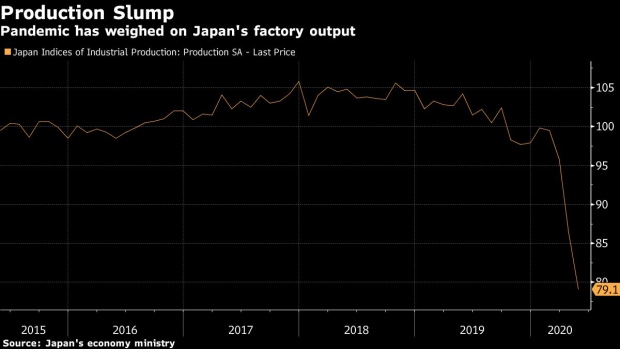 A worker pours a ladle of molten metal into a casting mold at the Tanaka Foundry Co. facility in Kawaguchi, Saitama Prefecture, Japan, on Wednesday, Nov. 20, 2019. Japanese machine tool orders fell a revised 37.4 percent in October from a year earlier, according to the Japan Machine Tool Builders’ Association. Photographer: Noriko Hayashi/Bloomberg , Bloomberg

(Bloomberg) -- Japan’s industrial production dropped again in May even as a nationwide state of emergency was lifted, showing the severity of the pandemic’s impact on the export-reliant manufacturing sector.

Factory output fell 8.4% from April, the economy ministry reported Tuesday. Production slid from the prior month for a fourth time in a row, something that hasn’t happened since 2012. The result was worse than any of the forecasts from 28 analysts. The median projection was for a 5.9% decline.

A separate report showed the unemployment rate rose to the highest level in three years.

“Looking ahead, we see a pickup in production in June, with a gradual recovery continuing in 3Q, buoyed by the re-opening of economies in the U.S. and Europe.”