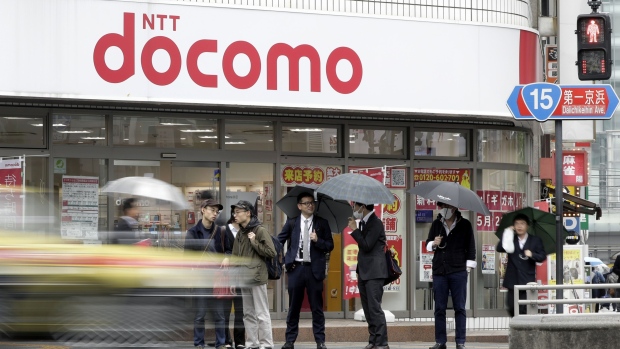 Pedestrians wait to cross a road in front of an NTT Docomo Inc. store in Tokyo, Japan, April 24, 2019. Bloomberg/Kiyoshi Ota

Telecom giant NTT Group is offering record pay to hire top scientists as it looks to match some of the basic research prowess of global powerhouses including Alphabet Inc. and Apple Inc.

The former Japanese telephone monopoly set annual salaries of as much as US$1 million for researchers at its Palo Alto, California, labs, said Kazuhiro Gomi, president of the company’s research arm. That’s more than the company pays its chief executive officer and 41-year veteran Jun Sawada, and a rare step for a traditional Japanese company like NTT.

The increased investment in basic science comes as NTT is regrouping its businesses to focus more on cloud computing services and data centres amid a dimming outlook for profit from its mainstay mobile phone carrier. Having star scientists on the lab’s payroll, backed by a 25 billion yen (US$230 million) five-year budget, helps the group draw better technology workers and partners as it wages a global war for top talent it needs to expand globally, Gomi said.

“We are competing with companies like Google and Apple,” said Gomi, explaining that the company had traditionally followed the Japanese norm of modest pay. “It wouldn’t be possible several years back.”

Tatsuaki Okamoto, director of cryptography & information security for NTT Research, is an example of a star that has helped draw in other top researchers in encryption, where interest in crypto-currencies has led to surging demand for expertise. Okamoto, an NTT R&D fellow since 1999, is known globally as a key researcher on block-chain technologies for cryptocurrencies.

The talent NTT is gathering is focused on cryptography, quantum computing and medical informatics in a bet that these fields can yield breakthroughs on a horizon of five years or more, said Kei Karasawa, vice president of corporate strategy for NTT Research.

The lab also needs big-name scientists because for most top researchers, high pay alone isn’t enough, said Karasawa. Scientists strongly prefer to work with the leaders in their field, he said.

Moreover, NTT’s pay isn’t at the top of the range in all fields. Oracle Corp., the software maker that’s racing to catch Microsoft Corp. and Amazon.com Inc. in cloud computing, offered a pay package worth US$6 million to hire a single expert in artificial intelligence, Business Insider reported. And while US$1 million a year dwarfs the pay of many IT professionals, it’s far less than what most chief executives make at global companies of NTT’s scale.

That too is a contrast with Japan, where average CEO pay at top companies is less than US$1 million, compared with more than 10 times that for the average U.S. boss of a big firm.

NTT is pushing for overseas growth while forecasting a 13-per-cent drop in net income at NTT Docomo Inc., its mobile carrier in Japan, this fiscal year, following a 16-per-cent decline in the previous year. NTT said it was forming a global technology and services provider by combining capabilities of 28 of its companies including NTT Communications Corp., Dimension Data Holdings Plc and NTT Security Corp. The goal is to create Top 5 global technology and business solutions provider with US$20 billion in revenue outside Japan, Sawada said at the time.

Cryptography, the science of encoding and decoding data to maintain privacy, is fundamental to the internet’s security and plays a role in block-chain and crypto-currencies, two red-hot areas of research and development. Quantum computing, which uses properties of quantum mechanics to speed up processing, has the potential to help discover new drugs and improve the algorithms that shape industrial logistics and supply chains.

The third area, medical informatics, presents an opportunity to apply powerful computing technologies to mapping molecules in a way that can help scientists better understand viruses and how to combat them.