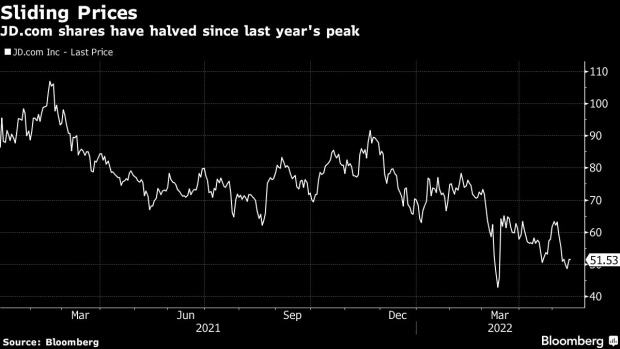 JD and larger rival Alibaba Group Holding Ltd. are grappling with the economic fallout from the coronavirus-related lockdowns that have snarled logistics to cities such as Shanghai. Heavily reliant on domestic sales, JD has been expanding brand offerings to tempt shoppers. Alibaba is expected to post its slowest quarterly growth in revenue since its 2014 listing.

Billionaire Richard Liu’s online shopping empire has largely avoided a direct hit from Beijing’s crackdown on China’s biggest tech companies. Fines on Alibaba by Chinese antitrust watchdogs even helped the company gain access to brands like Starbucks and Estee Lauder, which had been previously exclusively tied to Alibaba in China.

But ongoing concern about China’s priorities, along with US regulators’ plans to possibly force JD and some of China’s biggest companies to delist, are weighing on the stock. JD’s market valuation has shrunk by about 50% from a high last year.