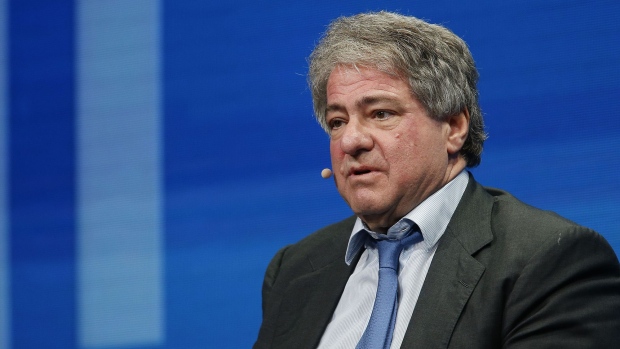 (Bloomberg) -- Almost a decade after Jeffrey Epstein was first accused of preying on young women, he still had access to the inner sanctum of Apollo Global Management.

Leon Black, Apollo’s billionaire chairman, met with the financier from time to time at the company’s New York offices, and he allowed Epstein to pitch personal tax strategies to the firm’s executives, according to people familiar with the matter.

The executives were puzzled. Why invite Epstein, a registered sex offender since 2009, into one of Wall Street’s most powerful private equity firms? What services could he possibly provide?

Black, 68, has belatedly provided one answer: for years he himself occasionally turned to Epstein on financial matters like taxes, estate planning and philanthropy, Black disclosed in a memo to his employees last week.

Apollo rushes to distance itself from Black’s ties to Epstein

Epstein cultivated a number of prominent Wall Street figures over the years. Yet his association with Black stretches back more than two decades and ran deeper and longer than even some at Apollo initially believed.

“I do not know what you are referring to,” said Florence Gaubert, a spokeswoman for Edmond de Rothschild, adding that the bank has no business links with Apollo or Epstein.

At least one Apollo executive was invited to listen to Epstein’s tax pitch. Meanwhile, he also pursued co-founder Josh Harris, who rebuffed the approaches, one of the people said.

Charles Zehren, a spokesman for Apollo, said in a statement Tuesday that Black “never promoted Jeffrey Epstein’s services, regarding tax and estate planning, to other Apollo senior executives.”

Black’s links to Epstein have become a source of fascination and concern to some Apollo employees and investors, including the California Public Employees’ Retirement System, which has committed more than $5 billion to 11 Apollo funds and is its second-largest shareholder.

“Calpers takes this issue very seriously,” Wayne Davis, a spokesman for the Sacramento-based pension, said in an email last week. “The actions our general partners take, both in professional and private contexts, impact our assessment of which firms we desire as long-term partners. We consider any issue, including reputational risk, a serious matter if it impacts a firm’s ability to be successful.”

He said Tuesday that the pension fund is “in the process of contacting Apollo to discuss this.”

Black and Epstein’s relationship has come under renewed scrutiny after the disgraced financier was arrested July 6 on federal charges that he molested and exploited teenage girls.

After conducting a review of emails and documents, Apollo said it established that Epstein, 66, never worked with the firm. He’s being held in a Manhattan jail and pleaded not guilty to the latest charges. Black told employees last week that he “was completely unaware of, and am deeply troubled by, the conduct that is now the subject of the federal criminal charges brought against him.”

Black isn’t alone in continuing a professional relationship with Epstein years after his first conviction, although Epstein’s biggest benefactor, Les Wexner, the billionaire behind Victoria’s Secret, said he severed ties more than a decade ago. JPMorgan Chase & Co. had maintained a relationship with Epstein for years after, while Deutsche Bank AG cut him loose in recent months.

Epstein and Black have been acquaintances since at least the early 1990s. The relationship deepened as Black became one of the wealthiest and most powerful people in finance.

Black is worth $6.5 billion, according to the Bloomberg Billionaires Index, having built Apollo -- along with Rowan and Harris -- into one of the world’s largest private equity firms. The company reported financial results Wednesday, saying it raised more than $12 billion in the second quarter, bringing assets under management to about $312 billion.

Along the way, Black has become among the world’s foremost art collectors, expanded his investments outside Apollo through his family office Elysium Management and become a philanthropist, with a particular focus on melanoma research after his wife Debra was diagnosed with the skin cancer.

Epstein was a director of the Leon Black Family Foundation from at least 2001, according to disclosure forms filed with the U.S. government. His name appeared on these forms until 2012. That was an administrative error, a spokeswoman for Black said last week. Epstein was asked to resign in 2007, but records weren’t kept up to date, she said.

Black and Epstein were still doing some business in 2015. That year, BV70 LLC, a charity controlled by Black, donated $10 million to Epstein’s foundation, Gratitude America.