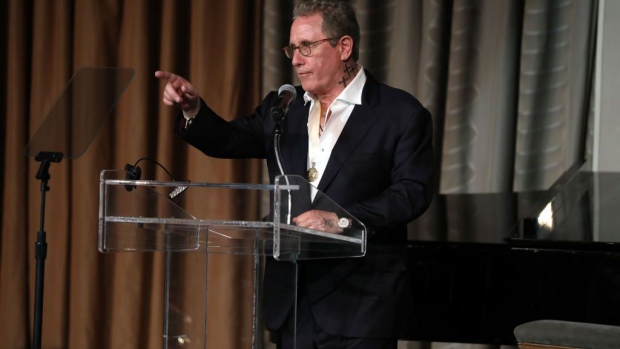 (Bloomberg) -- Jeffrey Epstein was deep into legal trouble when he cut a deal near his private Caribbean island with a titan of New York real estate, Andrew Farkas.

The scion of the family that built Alexander’s department store, Farkas made Epstein a partner in a small marina on St. Thomas in the U.S. Virgin Islands, not far from where Epstein was developing a 70-acre island.

The May 2007 arrangement gave Epstein an entree to the high-end world of luxury yachting, a business befitting his lifestyle and the wealthy people he spent decades courting. It united Epstein -- who would soon become a convicted sex offender and is now accused of abusing and trafficking girls as young as 14 -- with a key figure in New York’s business and political scene.

And it provided near anonymity. For more than a decade since the partnership was formed, the public records of Farkas’s port company have glossed over the involvement of the convicted felon.

The marina deal, though a modest venture for a Farkas company, is the latest example of an arrangement between Epstein and a wealthy partner that’s been largely under wraps. Epstein long described himself as a financier who catered to the needs of the mega-rich. Until recently, his financial ties have been traced mostly to retail mogul Leslie Wexner.

The arrangement hints at how Epstein sought to steady his finances and solidify his offshore base during a personal crisis. Farkas, an avid yachtsman who until recently owned the Montauk Yacht Club, formed the 50-50 partnership with Epstein nearly a year after Epstein had been catapulted into tawdry headlines on Florida charges of soliciting girls for prostitution. At the time, federal prosecutors were also circling.

Financial pressures were building for Epstein, too. On the mainland, civil lawsuits were stacking up from alleged victims. By contrast, his enclave in the Virgin Islands afforded a measure of privacy and security.

The timing and other details of the Farkas-Epstein collaboration have emerged in an unrelated business lawsuit in South Carolina. The court record, some of which remains sealed, contains sworn statements from the chief financial officer of one of Farkas’s companies and its outside auditors who still struggle to fill in some of the missing pieces.

Epstein and Farkas had interests that converged in St. Thomas. Along with his mansions in Manhattan and Florida, private jets and a helicopter, Epstein owned the nearby island of Little St. James, where he would develop a palm-lined private paradise and host young women.

Farkas had a grand vision for his Island Global Yachting, a two-year-old marina business specializing in slips for mega yachts around the world. He was building a major development on St. Thomas and hungry for other Caribbean properties.

In January 2007, he acquired American Yacht Harbor, a 127-slip marina with a small shopping center in Jessup Bay, on the east side of St. Thomas. The purchase was completed for an undisclosed price by an entity he controlled, according to a 2018 deposition by Jennifer Doelling, the current chief financial officer.

It’s not clear how Farkas and Epstein struck up the deal that followed. But in late May of that year, Epstein bought half the ownership interest in that marina, Doelling said in the deposition. Neither Doelling nor the accountants knew what Epstein paid for his stake in the marina, according to their depositions.

A spokesman for Island Global Yachting declined to comment on behalf of the company and Farkas. Lawyers for Epstein didn’t respond to requests for comment.

Deeper ports were in demand as the world’s wealthiest, from Dubai to Moscow, raced to acquire ever bigger yachts. Few spots in the Caribbean could accommodate these floating status symbols. IGY saw an opportunity.

Though the Jessup Bay project was small relative to IGY’s portfolio, the company was also adding projects from St. Maarten to St. Lucia. The average project cost was $100 million to $150 million, Farkas told the New York Times in a 2006 article about the demand for multipurpose marina properties with residential, commercial and entertainment venues.

In just one example, Wexner’s yacht, the 316-foot Limitless, had scant docking options in the Virgin Islands in the early 2000s, according to a former employee on Epstein’s island. Up until IGY launched a new port on St. Thomas in the U.S. Virgin Islands, Wexner’s craft could dock only at the cruise port at Charlotte Amalie. On the Dutch island of St. Maarten, some 100 miles away, the locals widened the Simpson Bay drawbridge, which allowed yachts like the Limitless easy access to the Isla de Sol marina, which IGY later acquired.

For decades, Epstein had intertwined his finances with Wexner’s and opened doors with money. He had also surrounded himself with celebrities, business executives and politicians -- including Ehud Barak of Israel and former U.S. President Bill Clinton -- while cultivating the image of a moneyed philanthropist.

Though it’s unclear when Epstein and Farkas first crossed paths, they have some social ties. Farkas, a Harvard graduate, is chairman of the Hasty Pudding Institute, a school social organization that has received tens of thousands of donations from charities connected to Epstein, who did not finish college. An uncle of Andrew, a film and Broadway theater producer named Jonathan Farkas, was friends with Epstein for decades.

Jonathan Farkas told the Daily Beast in 2011 that he had visited Epstein when he was under house arrest for underage solicitation. “The side I’ve been reading about is a side I don’t know,” he said. “Unless I’ve seen it, I don’t focus on it.”

Hailing from a prominent real estate family, Andrew Farkas built a successful real estate business of his own, now known as Island Capital Group, which has also made forays into ports and into ventures in spots as far-flung as Dubai. He remains chairman and chief executive officer.

Farkas’s company hired Andrew Cuomo in the early 2000s, and he later served as finance chairman for Cuomo’s successful campaign for New York attorney general. He has co-invested with Jared Kushner, President Donald Trump’s son-in-law and a senior White House adviser, on a group of Manhattan apartments and in the real estate start-up Cadre.

Farkas’s marina business, IGY, has blossomed as well. It encompasses some of the world’s most glamorous locations, including Sardinia, Italy; Sete, France, the superyacht landing spot between Barcelona and St. Tropez; as well as two Marinas on St. Thomas.

Along the way, Farkas had a falling out with a minority investor in one of the St. Thomas marinas -- a dispute whose legal filings provide a glimpse into his partnership with Epstein at the other St. Thomas port.

The investor, Peter Morris, says he was tricked out of some money and has since filed a lawsuit in state court in Greenville, South Carolina. Though he’s not suing Farkas, Morris says Farkas failed to honor an agreement that essentially promised him equity in any other St. Thomas marina if the company expanded there -- as it did when Farkas purchased American Yacht Harbor.

Morris is suing the marina’s outside accounting firm for conducting “negligent” audits. The accounting firm, Scott and Company LLC, was hired years after the deal with Epstein, and two of its accountants said in depositions that they didn’t have full details of the transaction. The firm’s lawyers say its auditing practices were sound.

The IGY spokesman declined to discuss Morris’s accusations because the company isn’t a party to the suit. Morris and his lawyers didn’t respond to requests for comment.

Given Epstein’s conviction as a sex offender in 2008, it’s not a surprise that his ownership stake was rarely discussed at IGY and appears to have been known by few. Company officials didn’t use Epstein’s name when releasing public information about the marina, referring to him instead as “a passive investor,” Doelling and the accountants said in depositions.

Epstein was seldom seen around the marina, several people who worked there said. Under a rental agreement that began before Farkas arrived, Epstein leases 3,200 square feet of office space there for his company, Southern Trust Co., which is identified in U.S. Virgin Islands filings as “a DNA database and data mining” company.

Epstein also rents six boat slips, used primarily by construction and maintenance crews shuttling from St. Thomas to Little St. James, home to Epstein’s luxury compound. During some years, Epstein’s company got a 20% discount on the rent from the Farkas joint venture, according to AYH documents.

Federal prosecutors in New York who brought a new case against Epstein this month are trying to piece together his finances. They say he’s worth at least $500 million, based on information from a single financial institution, while persuading a judge to hold him without bail on charges of operating a sex trafficking enterprise from 2002 to 2005.

His biggest known benefactor over the years remains Wexner, a billionaire who leads L Brands Inc., parent of The Limited and Victoria’s Secret, and previously owned Epstein’s New York townhouse. After Epstein was sentenced for soliciting prostitution in Florida in 2008, he moved $46 million in Apple stock and other assets to a foundation affiliated with the Wexner family.

That foundation was created toward the end of 2007, several months after Epstein’s deal with Farkas. The funds were later transferred to a different Wexner entity.

The reason for the transaction isn’t clear. Wexner and his family are connected to several charitable vehicles.

At one of those charitable funds, Epstein once served as a trustee, but Wexner has said he severed their ties more than a decade ago. A spokeswoman for Wexner’s L Brands, didn’t respond to a request for comment.

Andrew Farkas doesn’t populate Epstein’s social clippings. After a divorce in 2018, when his public outing with a then-Harvard student made the gossip pages, he too has made some financial adjustments. Early this year, he sold his limestone townhouse on East 73d Street for $41 million, according to property records, one of the city’s priciest townhouse sales ever.

Blocks away on 71st Street, brokers are eyeing the Epstein mansion that prosecutors are attempting to seize. If it is sold, they say it could fetch the highest price ever for a city townhouse, perhaps $100 million.

--With assistance from Caleb Melby and Greg Farrell.

To contact the reporters on this story: David Kocieniewski in New York at dkocieniewsk@bloomberg.net;Jonathan Levin in Miami at jlevin20@bloomberg.net

To contact the editors responsible for this story: Jeffrey D Grocott at jgrocott2@bloomberg.net, ;Winnie O'Kelley at wokelley@bloomberg.net, David S. Joachim