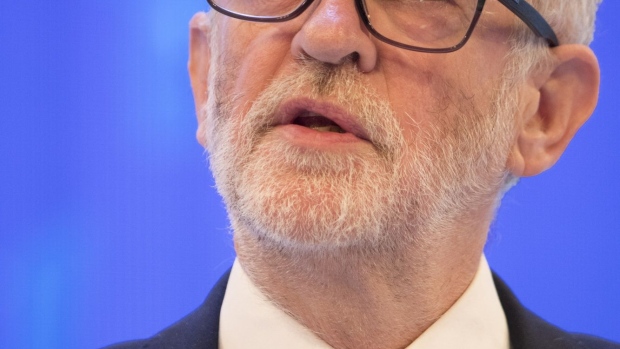 Jeremy Corbyn, leader of the Labour party, speaks at the Confederation of British Industry (CBI) 2019 Annual Conference in London, U.K., on Monday, Nov. 18, 2019. British Prime Minister Boris Johnson will try to win business leaders to his side with an offer of tax cuts at the start of a crucial week in the U.K. general election campaign. , Bloomberg

(Bloomberg) -- U.K. Labour Party leader Jeremy Corbyn tried to shut down questions about his Brexit position by saying he’d stay neutral in a second referendum on whether to leave the European Union.

Corbyn has previously refused to say what he’d do, something that has dogged him in the campaign for the Dec. 12 general election. His pledge came in a BBC question-and-answer show featuring the leaders of Britain’s four main political parties, in which all of them came under hostile questioning from a studio audience in Sheffield, Northern England.

“My role as Prime Minister will be to adopt a neutral stance so I can credibly carry out the result,” the Labour leader said. “My role and the role of our government will be to ensure that that referendum will be held in a fair atmosphere and we will abide by the result.”

Prime Minister Boris Johnson has focused his fire on Corbyn’s previous refusal to say which side he would take in a second referendum. Now there’s an answer to the question, although Johnson’s Conservatives immediately accused Corbyn of sitting on the fence. The Labour leader argues the public should be given a final say on whether to back any new deal he agrees with the EU or to remain in the bloc.

For Johnson, who went last, the most difficult moments were when he was asked about offensive language he’d used in his career as a journalist, and when he was attacked for the Conservative government’s record on welfare and public services, in particular the National Health Service. He tried to distance himself from that by arguing that he had been London mayor for much of that time, and had only become prime minister a few months ago.

“For most of that time I was running London,” he said.

--With assistance from Charlotte Ryan, Greg Ritchie and Alex Morales.

To contact the editors responsible for this story: Tim Ross at tross54@bloomberg.net, Thomas Penny, Alex Morales