Federal Reserve Chair Jerome Powell signalled the U.S. central bank is likely to keep raising interest rates and leave them elevated for a while to stamp out inflation, and he pushed back against any idea that the Fed would soon reverse course.

He said restoring inflation to the 2 per cent target is the central bank’s “overarching focus right now” even though consumers and businesses will feel economic pain. He reiterated that another “unusually large” increase in the benchmark lending rate could be appropriate when officials gather next month, though he stopped short of committing to one.

“Our decision at the September meeting will depend on the totality of the incoming data and the evolving outlook,” he said.

Two-year Treasury yields. rose as investors digested the remarks, pushed as high as 3.44 per cent while the 2- to 10-year yield curve resumed its flattening. Equities were lower.

“In one line: Nothing for doves,” Ian Shepherdson, chief economist with Pantheon Macroeconomics, wrote in a note to clients. “The Fed can’t ease until inflation is clearly headed back to target, and wage growth has slowed markedly. The Chair’s message today is that the Fed thinks these conditions are unlikely to be met as soon as markets expect.”

Prior to Powell’s speech, investors saw the odds of a half-point or another three-quarter point hike at the Fed’s Sept. 20-21 gathering as roughly even. They remained in that vicinity after he spoke, but the amount of reductions in fed rates priced for 2023 briefly retreated.

“Restoring price stability will take some time and requires using our tools forcefully to bring demand and supply into better balance,” Powell said in remarks that were set to be live-streamed for the first time from inside the lodge where the event has been held since 1982.

Other Fed speakers in recent days have also pushed back against expectations that the Fed would raise rapidly to a restrictive policy stance and then begin to ease.

Restoring price stability will require a “sustained” period of below-trend growth and a weaker labour market, Powell said. “While higher interest rates, slower growth, and softer labour market conditions will bring down inflation, they will also bring some pain to households and businesses,” he said.

Powell’s remarks at the retreat, which gathers top policy makers from around the world, come as U.S. central bankers confront the highest inflation in 40 years. Officials were slow to spot the risk and are now moving aggressively to keep prices from accelerating further. Officials raised rates by 75 basis points at their last two meetings and signaled the same could be on the table again when they gather next month.

Critics have slammed the Fed for failing to anticipate the inflationary surge, which the Fed initially viewed as transitory. Powell told the conference in his address a year ago that price pressures were limited to a relatively narrow group of goods and services. But within months it was spreading and by the time the Fed began raising rates from near zero inflation was already three times their 2 per cent target. 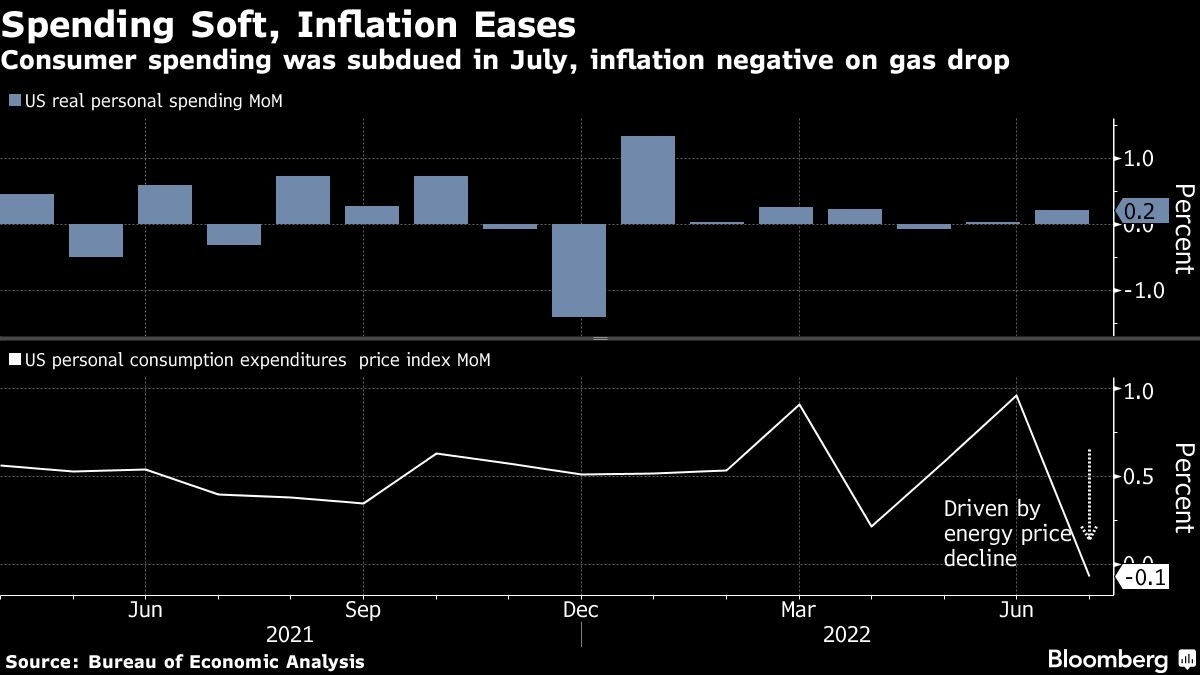 t remains elevated: While the Fed’s preferred measure of inflation eased to 6.3 per cent for the 12-month period ending July, wages and salaries had the biggest monthly gain since February, according to a government report released earlier on Friday.

“While the lower inflation readings for July are welcome, a single month’s improvement falls far short of what the committee will need to see before we are confident that inflation is moving down,” the Fed chief told the audience, gathered in person after two years of holding the conference virtually because of the pandemic.

“We are moving our policy stance purposefully to a level that will be sufficiently restrictive to return inflation to 2 per cent.”

Fed officials in June projected rates rising to 3.4 per cent by the end of this year, according to their median estimate, and 3.8 per cent by end 2023. They will update those forecasts in September. Investors were pricing in the probability of cuts in the back half of 2023, though Fed officials are starting to push back against that view.

Looking beyond the current rate-hike cycle, policy makers are trying to assess whether longer-run inflation pressures will remain persistent. Supply chain costs may be shifting higher, and the supply of U.S. labor could remain tight for years to come due to an aging population and limited immigration.

Powell said the labor market is “clearly out of balance” with demand for workers “substantially” exceeding supply.

US unemployment rate matched a five-decade low of 3.5 per cent in July with payrolls fully recovering to pre-pandemic levels.

Ahead of Powell’s speech, several Fed officials emphasized the central bank is in no way done, with Kansas City Fed Chief Esther George noting that the destination of the federal funds rate may be higher than markets are currently priced for.

“We have to get interest rates higher to slow down demand and bring inflation back to our target,” said George, who votes on monetary policy this year.

Financial markets have the benchmark lending rate peaking under 4 per cent early next year.

Asked how high the Fed should push borrowing costs, George said there was “more room to go” and pushed back against bets in financial markets the central bank would begin cutting rates next year.

“I think we will have to hold -- it could be over 4 per cent. I don’t think that’s out of the question,” she said in a Bloomberg Television interview. “You won’t know that, I think, until you begin to watch the data signs.”