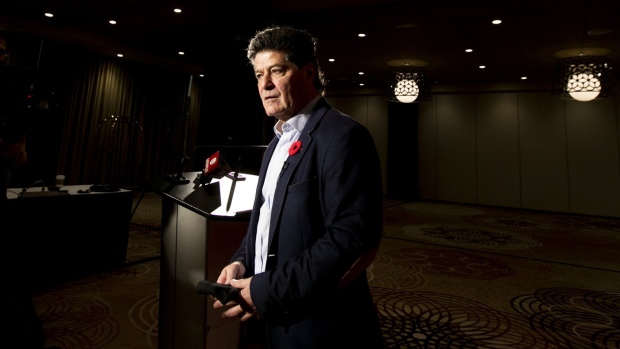 Unifor national secretary-treasurer Lana Payne said at a press conference Wednesday that Dias is being charged with violating the code of ethics and democratic practices of the union's constitution after an internal investigation.

"What you're about to hear will be distressing, but I remind you all that no one member is above our constitution, not the highest ranking elected officers, no one," Payne said. "We are all equal under that constitution."

She announced Dias will now be subject to a hearing hosted by the union's executive board as soon as April, which could result in his Unifor membership being suspended temporarily or permanently.

The allegations Unifor levelled have cast a shadow on Dias, once their tough-talking and scrappy leader, who has sparred with everyone from automakers to politicians in a bid to secure better job security, benefits and rights for workers.

The allegations have unfolded as Dias neared a decade at the helm of the union, which represents about 315,000 workers, and come as he faces health issues.

The union alleged that at some point before Jan. 20, Dias accepted $50,000 from a COVID-19 test kit supplier, which Payne declined to name and said was not a participant in the union's investigation because the company does not employ any Unifor members.

Payne said Dias then gave a Unifor employee what he said was half of those funds, $25,000, on Jan. 20, telling the employee that it had come from the supplier. The employee subsequently filed a complaint under the Unifor code of ethics and delivered the money to Payne.

Unifor would also not identify companies who bought the kits or say how many purchases might have been made because of recommendations from Dias.

No other union members are under investigation in connection with this matter, she said.

Dias was notified of an independent investigation on Jan. 29 and began a medical leave on Feb. 6, citing "ongoing health issues." About a month later, the union announced he was retiring, before adding the next day, that he had was subject to an investigation.

In a statement released just before the union's press conference, Dias revealed he will enter a residential rehabilitation facility and temporarily step away from all of his advisory positions due to his use of pain killers, sleeping pills and alcohol to deal with a sciatic nerve issue.

"These factors have impaired my judgment in recent months, and I owe it to our members to seek the treatment I need," he said.

"My physician has told me, straight up, that I need help."

The union said Dias was asked to participate in the investigation, but that Dias was advised against it by his doctor.

"I hope that he is getting the medical treatment that he feels that he needs," said Payne.

She noted that the union has paused an election to name Dias' predecessor. Unifor Local 444 president Dave Cassidy and Scott Doherty, who served as Dias’s executive assistant, are both running.

Asked whether the investigation and forthcoming hearing could result in criminal charges, Payne said the union is seeking legal advice and will fulfil any obligations related to the incident.

"The reins are really in the hands of Unifor, in terms of whether or not criminal charges will be laid, because a lot of the information to support a complaint of that kind has to come from Unifor," said Sunira Chaudhri, a partner at Workly Law in Toronto.

But reporting their allegations to police means Unifor can do little to steer the public narrative, which is important to any organization facing turmoil, she added.

"If there are other instances here of corruption, of bribery, or worse, Unifor is not going to be able to control that message," she said.

Payne has said the incident was "isolated" and based on a "balance of probabilities" because evidence wasn't collected from Dias.

If Unifor were to pursue this matter criminally or in a civil lawsuit, Chaudhri said suppliers, employers and even Dias could be subpoenaed and forced to provide evidence.

"It sort of gives you an opportunity to poke a bit deeper," she said.

Though there's a risk of missteps being made public, those avenues would also build credibility with union members, she said.

"I don't know that they're going to actually end up having the trust of the membership by not pursuing it beyond this transaction because, as an eight-year president with the tenure, access and reach that he's had, to turn a blind eye to what else could have happened might not go over well."