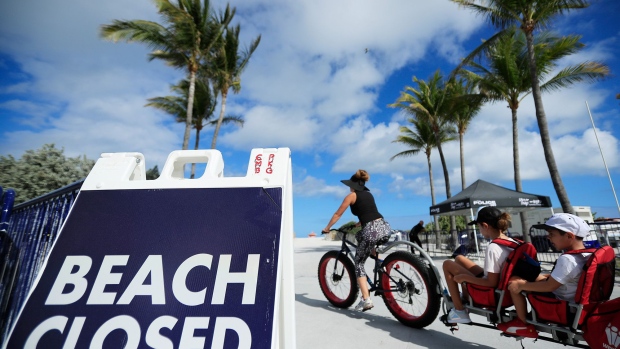 The Atlantic Ocean resort town of Seaside Heights, made famous by MTV’s “Jersey Shore” reality show, is fighting an entirely different kind of contagion by closing its beach.

Mayor Anthony Vaz ordered beach gates locked on March 23 “to serve as a disincentive” to visitors. a swath of barrier-island beach towns that helped generate $44.7 billion in statewide tourist spending in 2019. Point Pleasant Beach, at the other end of the island, closed its boardwalk on March 24.

“The shore is our crown jewel, but we don’t want you going to the shore right now,” Governor Phil Murphy said Tuesday during his phone-in radio program on WBGO-FM in Newark.

Towns in Florida, Alabama and elsewhere closed beaches last week after social media videos showed Spring Break college students on the sand. Some were engaging in “Jersey Shore”-style drunken antics, even as U.S. citizens were being urged to stay away to help slow the virus’ spread and prevent too much strain on local services and hospitals.

Though Murphy issued an order Tuesday to broaden the types of businesses that are allowed to operate, including livestock feed stores and garden centers, he also empowered municipalities to block beach and boardwalk access.

Some resorts, though, were reluctant to turn their backs on part-time residents who are crucial to the local economy.

“These are our friends and neighbors -- what are we going to say to them?” said Barbara Borsack, deputy mayor of East Hampton, New York, where 22,000 year-round residents have been joined by homeowners not usually seen for months. “If I had a choice, I’d rather be here than in New York City, too, where my kids could run out and play. I don’t begrudge them coming here, but it would be better if they stayed put.”

Around the world, the message was starker.

“Your holiday, our lives -- turn around,” read a sign posted in Newport, Pembrokeshire, in a part of Wales popular with wealthy second homeowners. Charles, the 71-year-old Prince of Wales and heir to the British throne, has tested positive for the virus.

Scotland’s government website on March 21 noted a swell of new arrivals in camper vans or en route to second homes.

“I am furious at the reckless and irresponsible behaviour of some people traveling to the Highland and Islands,” Fergus Ewing, rural economy and tourism secretary, wrote. “This has to stop now.” He warned of pressure on rural shops and National Health Service resources.

In Mono County, California, Supervisor Stacy Corless said she had fears over online comments -- including a threat to slash tires -- regarding visitors and second homeowners at the Mammoth Lakes ski resort. “I’m worried someone is going to get shot,” she told the Sacramento Bee.

Some of the harshest talk, though, is in New Jersey, the crass-culture incubator for the “Jersey Shore” series that made stars out of Snooki and Pauly D.

A Facebook page called Cool Cape May, highlighting the New Jersey beach town, was yanked by its administrator when a vicious back-and-forth erupted over the early arrival of Pennsylvanians and New Yorkers. On Long Beach Island, a heavily developed spit of sand between the Atlantic Ocean and the Barnegat Bay, “Benny” and “shoobie” are derisive New Jersey shore dialect for out-of-towners.

Murphy, the governor, leaned on his diplomacy skills as former U.S. ambassador to Germany, an appointment he received after retiring as a Goldman Sachs Group Inc. senior director.

“The local infrastructure -- especially the health-care infrastructure and especially in the off-season -- is not prepared for the influx of part-time residents,” Murphy said on March 21. “There’s absolutely no excuse for a party on the beach. Please stay at your primary residences.”