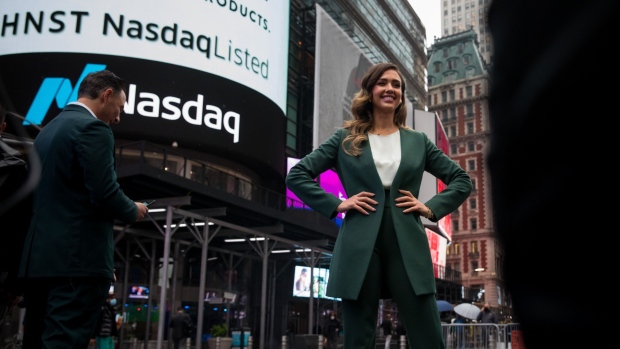 Actress Jessica Alba cemented her claim to one of the most lucrative side gigs in Hollywood after shares of her beauty business, the Honest Co., soared almost 40 per cent in its market debut.

The “clean” beauty- and baby-products maker’s stock jumped to US$22.19 at 1:13 p.m. in New York after pricing the shares at US$16, within its marketed range of US$14 to US$17. Alba’s roughly 5 per cent stake is valued at US$94 million, according to the Bloomberg Billionaires Index. She also has exercisable options valued at about US$23 million.

“I was born into a hardworking Mexican-American family. My parents worked multiple jobs, doing whatever it took to get by,” Alba wrote in a letter included in the company’s prospectus, describing a childhood marked by poor health and hospital stays. “By the time I was ten, I became aware of how wellness can define your whole life. That’s never left me.”

Alba, 40, founded the business in 2011, motivated by the dearth of baby products that were free of harsh chemicals. The carbon-neutral company makes diapers, wipes, shampoo and lotions it bills as “clean and natural,” and targets a customer base of parents who are eco-conscious, aspirational and relatively affluent. Honest Co. had revenue of about US$301 million in 2020, a 28 per cent jump from a year earlier, and an operating loss of US$13.5 million.

The Los Angeles-based company is now valued at US$2 billion, or US$2.36 billion when fully diluted to include employee stock options and restricted stock units. That’s significantly more than its US$860 million implied valuation in a 2017 funding round, according to Pitchbook. Honest has been dogged in the past by product recalls and controversy over its claims to use only natural ingredients. Prior to those issues, it was valued at US$1.7 billion in a 2015 funding round.

The IPO marks an almost 250 per cent return for L Catterton, the private equity firm backed by billionaire Bernard Arnault that invested US$200 million in 2018. The company sold about half its stake in the offering.

The actress is a rare example of someone successfully bridging a career between Hollywood and Wall Street. While many celebrities strike licensing deals for fashion lines or products such as perfume or vodka, few have gone on to found publicly traded companies.

Alba, whose official title is chief creative officer, continues to work as an actor, most recently starring in the crime television series, “L.A.’s Finest.”