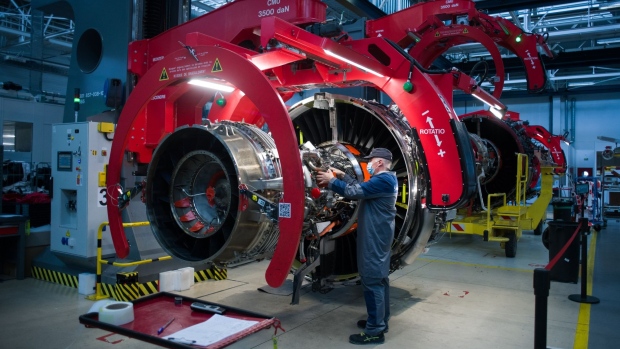 An engineer works on a LEAP-1A engine at the Safran plant in Villaroche, France. , Bloomberg

French jet-engine maker Safran SA set out ambitous targets for revenue and profit growth through 2025, driven by a rapid production ramp-up and the potential sale of non-core assets.

The aerospace supplier is aiming for recurring operating income margin between 16% and 18% of sales by 2025 -- up more than 5 points from 2021 -- with annual organic revenue growth of 10% or more during the period, according to a statement Thursday.

The company also said it has put 30% of its Zodiac Aerospace business under review for possible sale as it focuses investments on new technologies.

The longer-term targets are the first in three years for Safran -- a major engine producer for planemakers Airbus SE and Boeing Co. They come at a critical juncture for the manufacturer as it comes back from a deep pandemic-induced slump and ramps up output.

“Safran is rebounding from the crisis with strong profitable growth at the forefront of sustainable aviation,” Chief Exective Officer Olivier Andries, who took the helm at the start of this year, said in the statement ahead of the group’s annual capital markets day.

The company said Thursday it’s prepared to roughly double production of the Leap engines that power both Airbus and Boeing narrow-bodies by 2023.

The rebound should produce about 10 billion euros ($11 billion) of free cash flow through 2025, Safran said, allowing the company to return to its historical 40% dividend payout rate in 2023, with profits from the coming year.

Safran, which also makes landing gear, seats and wheels, is among suppliers that have pushed back against Airbus’s goal to raise monthly build rates of the top-selling A320 series to as many as 75 by 2025.

The supply chain has weakened during the pandemic, Andries has said, and meeting the European planemaker’s goal of 65 A320s per month in 2023 will already be a challenge. An even higher rate may not be worthwhile if it’s just for a few years, he said in October.

Safran makes CFM 56 and Leap plane engines through the CFM International venture with General Electric Co. The company expects to raise the number of Leap-engine deliveries to around 900 this year. The firms are also teaming up to develop engines with lower carbon emissions.