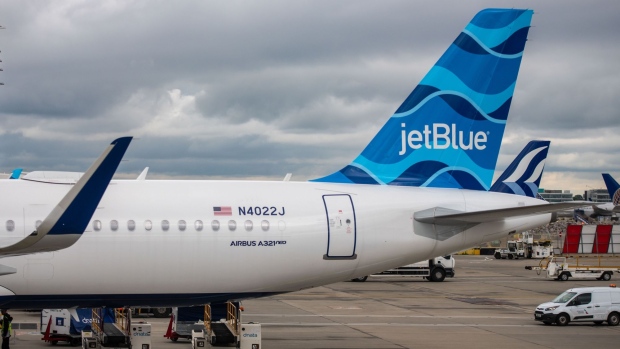 (Bloomberg) -- JetBlue Airways Corp. said it expects transatlantic “gravy” to add flavor to its menu of flights in the upcoming holiday travel season and beyond -- even as it faces indigestion from rising costs.

The carrier, which recently introduced service to the U.K., expressed high hopes Tuesday for its New York-to-London flight and for a continued rebound in domestic travel as people acclimate themselves to flying amid the lingering affects of the pandemic.

“The peaks are strong. Holidays are looking good,” Joanna Geraghty, president and chief operating officer, told analysts on a conference call.  “We’re excited about what next year brings, and we think the transatlantic is frankly gravy on top of what we’re already doing.”

JetBlue posted a narrower-than-expected loss for the third quarter but predicted some turbulence for the current three-month period. Adjusted earnings before interest, taxes, depreciation, and amortization may range from a $50 million loss to a $50 million profit, down from the $140 million earned in the most recent quarter, the company said.

The carrier cited higher fuel prices and labor costs as issues that may chip away at its bottom line. Jet fuel prices averaged $2.08 a gallon last year, up 1.2% from a year ago. And this quarter, JetBlue expects to pay $2.49 a gallon.

“We will maintain a competitive cost structure and return to our roots as a low-cost airline,” Robin Hayes, the New York-based airline’s chief executive officer, said on the call. “Demand is once again poised to reaccelerate into the peak holiday periods and beyond as people adjust to a new normal.”