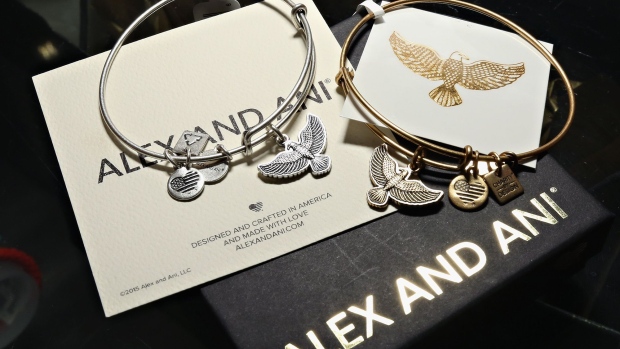 Jewelry maker Alex and Ani LLC, which operates dozens of stores, filed for Chapter 11 bankruptcy protection Wednesday and put itself up for sale.

The company said it entered into a restructuring agreement with debt and equity holders as it works to reorganize and boost its online and wholesale businesses. The retailer expects “little to no disruption” in operations. Alex and Ani now has about 524 part- and full-time employees and holds 74 leases, according to court documents. About one-third of its stores are still closed due to the pandemic.

Alex and Ani’s filing in Delaware listed assets and liabilities of US$100 million to US$500 million each. Mall owners Simon Property Group Inc. and Brookfield Property Partners LP are among its largest unsecured creditors; each are owed more than US$3 million in rent payments. Filing Chapter 11 gives a company relief from its obligations so it can continue to operate while it restructures.

Carolyn Rafaelian founded Alex and Ani in 2004 and opened the first store in Newport, Rhode Island, five years later. The company “operates as a symbol of spiritual wellness and connectivity,” Chief Restructuring Officer Robert Trabucco said in a court filing Wednesday, but has suffered from disruption for years. Rafaelian stepped down as Chief Executive Officer in 2019 after Lion Capital increased its stake in the company.

Rafaelian’s father owned a jewelry factory, and she began by selling wire charm bracelets and making items for private brands. Within a few years, she’d expanded to 1,000 employees and more than 100 stores and was churning out almost 10 million bracelets a year, eventually earning the company a valuation of more than US$1 billion.

But rapid growth came at a price. The company “struggled to keep up with demand” and suffered “significant” management turnover, Trabucco said in the filing. It also grappled with surplus inventory, “burdensome” leases and inventory management problems that led its wholesale business to plunge to 19 per cent of revenues from 59 per cent. In February of last year, it got hit with a ransomware attack. The pandemic further disrupted the company as it shuttered stores and saw sales fall.

By 2020, Rafaelian, once referred to as “the bangle billionaire” by Forbes, lost her company and US$900 million of net worth. Forbes, who put her on the cover of its Richest Self-Made Women issue, downgraded her fortune to roughly US$100 million.

The filing comes nearly two years after the firm sued Bank of America Corp. for more than US$1 billion, in a lawsuit which accused the bank of fraudulently declaring Alex and Ani in default of a US$50 million line of credit and of driving it toward bankruptcy. The bank said it strongly disagreed with the allegations at the time. That case was later dropped in August 2019.