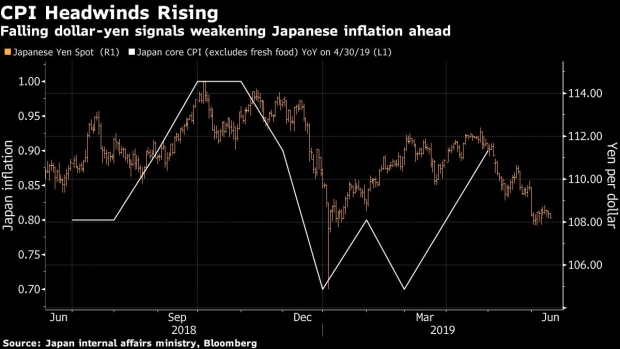 Yields on Japanese government bonds have fallen since mid-April, with returns on 10-year debt touching a near three-year low of minus 0.135% on June 7. While these moves tracked the rally in global bond markets as investors sought refuge from the Trump administration’s trade conflicts, domestic consumer prices are returning to the spotlight in Japan.

The country’s core inflation rate is projected to have slowed to 0.8% in May from a year earlier, less than half the Bank of Japan’s 2% goal. Estimates for inflation ex-food and energy are even more troubling, with economists surveyed by Bloomberg expecting a slowdown to 0.5% when the numbers come out on Friday.

With Kuroda indicating that a loss of momentum toward his price target would be a trigger for action, investors are debating whether he’ll ease monetary policy further this year, sending yields even lower to try to get inflation back on track.

The yen has strengthened about 3% since the BOJ’s last policy meeting in April, further sapping inflation. And a looming increase in the country’s sales tax risks exacerbating the problem by damping consumer spending.

Implied volatility in Japan’s government bond market jumped to the highest in five months on June 10 amid the speculation of more stimulus.

While most economists expect the BOJ to keep interest rates unchanged at the conclusion of its two-day meeting on Thursday, JPMorgan Chase & Co. has gone as far as forecasting a September cut in the short-term rate to -0.3%, from -0.1% now.

The key point for the market for the week could be any decision by the BOJ to extend its forward guidance, which states that the central bank plans to keep interest rates at the current extremely low levels “at least through around spring 2020.”

"Such a move could spark speculation that Japan would also tilt towards a rate cut," says Naomi Muguruma, senior market economist at Mitsubishi UFJ Morgan Stanley Securities Co. “In that case, the benchmark 10-year JGB yield could fall further towards minus 0.15%. But it won’t immediately test minus 0.2%.”

Below are key Asian economic data and events due:

--With assistance from Chikako Mogi.

To contact the reporter on this story: David Finnerty in Singapore at dfinnerty4@bloomberg.net