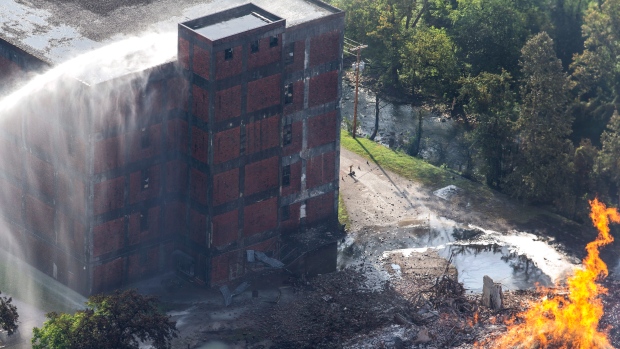 A fire at a Jim Beam bourbon facility in Kentucky ruined about 45,000 barrels, potentially destroying hundreds of millions of dollars of alcohol.

The spirits that went up in flames were “relatively young whiskey,” parent company Beam Suntory said in an email. “Given the age of the lost whiskey, this fire will not impact the availability of Jim Beam for consumers.”

The company did not specify a financial loss. The spirits maker operates 126 warehouses in Kentucky that hold approximately 3.3 million barrels, meaning the loss represents about 1.4 per cent of its product in the state. Any losses were insured, a spokeswoman for the company said.

Two warehouses caught fire late Tuesday, one of which was destroyed, according to Drew Chandler, the Woodford County Emergency Management Director. Damage to the second warehouse was contained to an external structure, Chandler said. A couple of barrels were left among the rubble of the burned structure, but none will be suitable for human consumption, he said.

Reports estimate the company can make between 150 and 210 standard-sized bottles per barrel. With estimated retail prices of between US$15 and US$35 per bottle, the destruction could result in between US$90 million to nearly US$300 million of lost bourbon, according to Bloomberg calculations.

The company spokeswoman declined to give a value, but said wholesale prices would be lower, and younger whiskey means less of a financial loss. “I can guide that the low end of the estimate is still high by several factors,” she said of Bloomberg’s calculations.

The fire in the first warehouse was still burning as of Wednesday morning, since putting it out with hoses could lead to contamination of a nearby river that feeds a drinking water facility, Chandler said. He estimated that the fire department would continue to let it burn for the next six to eight hours.

No one was injured in the incident, the company said, noting that it will “work with local authorities to confirm the cause and to remediate the impacts.”