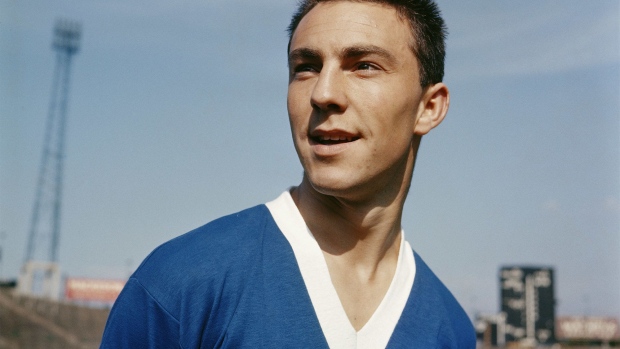 (Bloomberg) -- Jimmy Greaves, the fourth-highest goal scorer for England’s national soccer team who scored on his debut for every team he played for, has died. He was 81.

The Tottenham Hotspur club announced Greaves’ death at home early on Sept. 19 in a statement posted on its website. No cause of death was given.

Greaves, whose 44 goals in 57 international appearances is bettered only by Gary Lineker, Sir Bobby Charlton and Wayne Rooney, was a prolific scorer throughout his career before quitting in 1971 aged 31.

“He possessed immaculate ball control, great balance and such composure in front of goal that he rarely spurned an opportunity,” Tottenham said in its announcement.

But the East London-born striker is almost as notable for the one crucial game he didn’t play in -- the 1966 World Cup final. Greaves lost his place to Geoff Hurst after suffering a leg injury during the tournament, and then watched as his replacement netted three times in the final as England lifted the trophy for the only time.

“It was a very difficult period of my life,” Greaves told the Telegraph in an interview in 2003. “But I like to think I put it behind me pretty quickly because the following season I scored 37 goals for Spurs and we won the FA Cup, so it wasn’t as though I was down in the dumps. But it was the chance of a lifetime and I lost it.”

James Peter Greaves was born in Manor Park, East London, in 1940, one of three children for Jim Greaves, a London Tube train driver, and his wife, Mary. Jimmy, as he was known, was a notable soccer player from an early age, and once said that by the age of 15 he knew what he would do for a living.

“I honestly don’t know if I ever wanted to be a footballer,” Greaves told the BBC in a radio interview in September 1997. “It’s just something that was born in me and as I grew up I always kicked a ball. It was always the most natural thing that ever came to me.”

His goal-scoring prowess earned a move to AC Milan for where, Greaves told the BBC, he went from 20 pounds a week at Chelsea to 5,000 pounds a year.

While he didn’t stay long in Milan, he managed to score nine goals in 14 matches before returning to London to join Tottenham for 99,999 pounds -- a fee designed to avoid the burden of becoming the first 100,000-pound (then about $280,000) player.

Official government documents released 40 years later showed that the transfer was almost blocked as it was feared the fee may break currency controls set up to stop money flowing out of Britain.

Such was the sensitivity of the case that the matter was referred to the then Chancellor of the Exchequer Selwyn Lloyd, and Treasury officials only got around the rules by treating Tottenham’s purchase of Greaves as an “invisible import.”

Back in Britain, Greaves maintained his form in front of goal for the next nine years, netting 220 times in 321 league appearances for Spurs. He was the top league goal scorer for six seasons.

His goals helped Spurs to win the F.A. Cup in 1962 and 1967 and become the first English team to claim a European trophy, with victory in the Cup Winners’ Cup of 1963. Greaves scored twice as Spurs beat defending champion Atletico Madrid 5-1 in the final.

Greaves helped England to the World Cup quarterfinals in 1962 and was included again in the squad four years later.

A shin injury during a 2-0 win against France in the third group stage match gave Hurst his chance in the quarterfinal against Argentina, which he took by getting the only goal. Coach Alf Ramsey kept faith with Hurst instead of restoring Greaves to the lineup.

Greaves later gave different accounts of how it felt not be involved in the 4-2 final victory against West Germany, but in his 2003 autobiography “Greavsie” said he accepted Ramsey’s decision. He also always said his omission didn’t contribute to his later alcoholism.

Greaves played only three more times for England, scoring his final goal against Spain in May 1967. Three days later, against Austria, Greaves made his last international appearance.

Greaves finished his league career at West Ham United, his third London club and the closest to where he grew up. He scored twice on his debut in 1970, but quit the following year -- ending on 357 goals in 516 league games.

“I decided I’d had enough and wanted to walk away from the game,” he told the BBC. He also said he regretted stopping playing when he did and that he should have taken a break and then returned. But by the time he regained his desire “it was too late.”

Greaves, who’d married at 18 and fathered four children by 26, battled alcohol problems after retirement which led to bankruptcy and divorce, though he was later reunited with his former wife.

Greaves quit drinking in 1978, the year he made a short-lived playing return with Barnet in 1978 in the then Southern League, which ranked below England’s top four divisions.

He later became a columnist for the Sun newspaper, was a pundit and co-host on the “Saint and Greavsie” soccer show with former Scotland and Liverpool footballer Ian St. John in the 1980s, and was a regular after-dinner speaker.

In 2009, he was among 11 members of England’s 1966 squad who didn’t play in the final to be presented with a World Cup-winner’s medal by Prime Minister Gordon Brown at Downing Street.

Three years later he underwent an operation after suffering a minor stroke. In May 2015 he suffered a more severe stroke, leaving him in a wheelchair.

He is survived by his wife Irene, children Lynn, Mitzi, Danny and Andrew, and numerous grandchildren and great-grandchildren. The couple’s first child, Jimmy, died of pneumonia at four months in 1961.