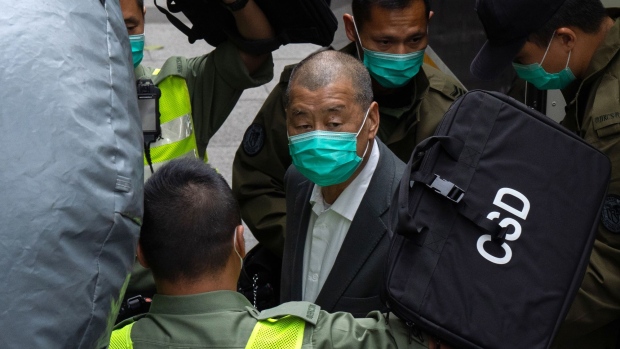 The 75-year-old was sentenced by Judge Stanley Chan in the District Court on Saturday after he was convicted on two counts of fraud in October. He was also fined HK$2 million ($257,000) and is forbidden to work in management for any company for eight years, media including online news portal HK01 reported.

Lai pleaded not guilty to using the former headquarters of his Next Digital Ltd. media company for purposes not specified in the lease. Prosecutors said the activity benefited Lai’s now-defunct Apple Daily newspaper, which closed last year under pressure from the city’s China-drafted national security law.

“Illegal demonstration, fraud, national security crimes — the diversity of the charges against Jimmy Lai, and the staggering severity of the sentences imposed on him, show how desperate the Chinese regime is to silence this symbolic figure of press freedom in Hong Kong,” Cédric Alviani, East Asia bureau head for Reporters Without Borders, said in a statement Saturday.

He urged the international community to increase pressure on Beijing and Hong Kong to “secure Lai’s release alongside all other journalists and press freedom defenders detained in Hong Kong and in the Mainland.”

Court cases against Lai have fanned concern about press freedom in the once-freewheeling city. Several pro-democracy media outlets closed after the introduction of the security law, which has been used to jail much of the city’s political opposition. Hong Kong has fallen 68 places from a year earlier to No. 148 in Reporters Without Borders’ most recent World Press Freedom Index.

“Beijing’s elaborate criminal case against Jimmy Lai is a vendetta against a leading proponent of democracy and media freedom in Hong Kong,” Maya Wang, associate Asia director at international non-governmental organization Human Rights Watch, said in a statement Saturday. The authorities should free him immediately, she said.

Lai is already serving 20 months for his role in unauthorized assemblies during 2019 anti-government protests. The pro-democracy activist also faces charges under the national security law, including conspiracy to collude with foreign forces.

In November, six former Apple Daily executives and editorial writers pleaded guilty to national security law charges. The defendants face one count of conspiracy to commit collusion with a foreign country, and a second count of seeking to publish seditious publications under the colonial-era sedition law.

--With assistance from Jeanny Yu.