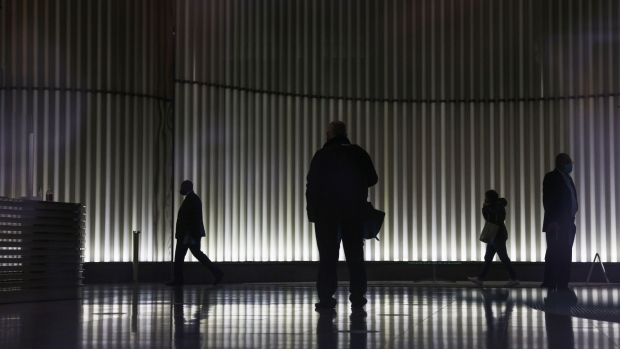 People walk through the lobby of an office building in the City of London, U.K., on Monday, June 21, 2021. Almost half of London companies whose staff can work from home expect them to do so up to five days a week after the pandemic finishes, and smaller businesses are more likely than larger ones to move ahead with remote working. Photographer: Hollie Adams/Bloomberg , Bloomberg

(Bloomberg) -- Eight in 10 U.K. companies do not expect to make redundancies in the next three months, an indication the labor market could avoid a severe shock as government job support is wound down.

The finding is contained in the latest batch of high-frequency indicators from the Office of National Statistics, which said only 1% of firms definitely planned to shed staff when they were asked late last month. Nineteen percent were not sure.

The furlough program, which has paid the wages of workers at firms forced to close during the pandemic, was still supporting 2.4 million jobs at the end of May. Employers are now having to contribute to the cost ahead of the program ending altogether in September. That’s led to fears of job cuts at businesses that are continuing to struggle, despite the lifting of lockdown restrictions.

The figures painted a generally upbeat picture of the labor market, with online job listings reaching 135% of pre-pandemic levels.

A survey by the British Chambers of Commerce this week found that firms were very keen to recruit staff but were facing difficulties. Half said they had attempted to recruit in the second quarter, a pandemic record. The construction sector faced the most challenges when hiring new staff, followed by hotels and catering

The ONS said daily flights were up 8% from the previous week and reached around one third of pre-pandemic levels, suggesting the plight of a sector hit hard by international travel restrictions is starting to ease. British travelers who have received both doses of a coronavirus vaccine will no longer need to isolate when they return home from moderate risk countries, under a plan officials expect to come into force this month.

In a separate report, the ONS said that employment was slightly lower than previously thought at the end of the last year, while unemployment and inactivity were slightly higher. The overall picture was still one of resilience, thanks to government interventions.

The revisions are the result of work to address the problems involved in collecting information during the pandemic.