The internet is the great equalizer in employment: Kramer Capital Research CIO

U.S. job openings surged in March to a record high, underscoring the rapid increase in labor demand as vaccinations accelerate and states reopen their economies.

The number of available positions increased to 8.12 million during the month, the highest in data back to 2000, from an upwardly revised 7.53 million in February, the Labor Department’s Job Openings and Labor Turnover Survey, or JOLTS, showed Tuesday. The median estimate in a Bloomberg survey of economists called for 7.5 million openings. 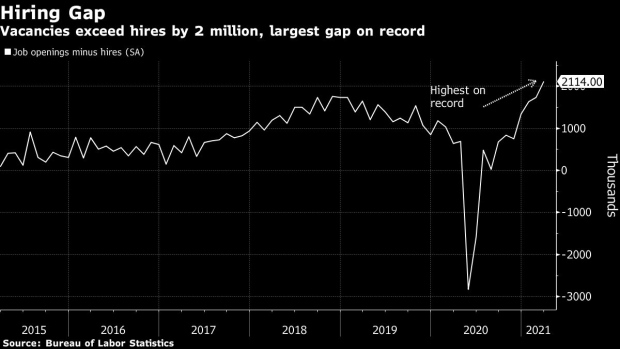 The number of vacancies exceeded hires by more than 2 million, the largest gap on record and evidence of current hiring challenges. Many employers say they are unable to fill positions because of ongoing fears of catching the coronavirus, child-care responsibilities and generous unemployment benefits.

The number of vacancies is consistent with accelerating demand as the economy reopens, with many companies trying to fill positions lost during the pandemic.

In another sign the economy is strengthening, the median single-family home price rose by the most on record in the first quarter.

The number of people who voluntarily left their jobs increased to 3.51 million, while the quits rate held at 2.4 per cent. Separations, which include both layoffs and quits, decreased to 5.32 million from 5.43 million as dismissals declined.

The increase in openings was fairly broad, including more available positions in accommodation and food services, manufacturing and construction.