Will be 'very difficult' to get payments out to Canadians in 10 days: Former EI Commission Chairman

In the 10 days between March 16 and March 25, some 1.55 million Canadians applied for jobless benefits, according to a senior government official with knowledge of the matter. That represents about 8 per cent of the labor force.

The new figure includes the 929,000 unemployment applications in the seven days through March 22, along with about an additional 620,000 claims in the first three days of last week, said the person, who spoke on condition they not be identified because the numbers aren’t public. 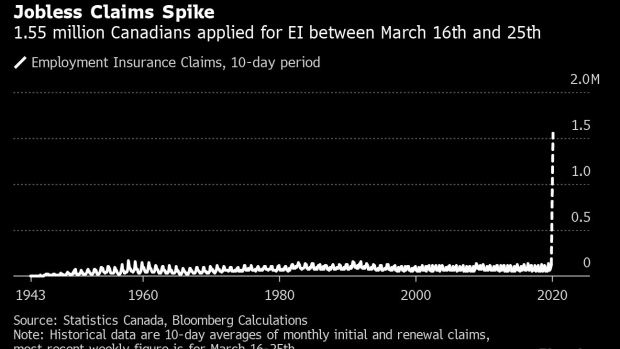 The sharp rise in lay offs highlights how abruptly the economy has seized up, forcing the government to ramp up a wage subsidy program this week to keep more workers on payrolls.

On a daily basis, claims averaged about 207,000 in the last three days of the data, compared with about 133,000 in the seven days before that.