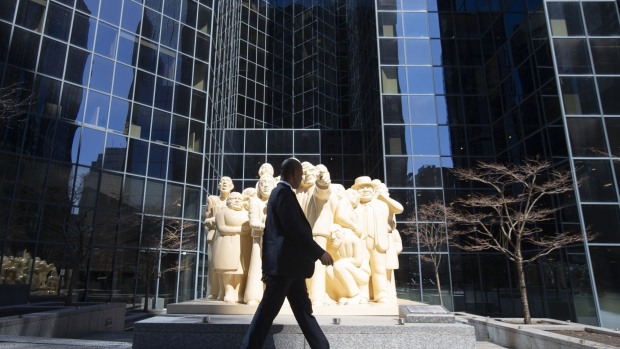 A pedestrian walks past a sculpture on McGill College Avenue in Montreal, Quebec, Canada, on Friday, March 27, 2020. Bloomberg/Christinne Muschi , Bloomberg

(Bloomberg) -- More than two million Canadians, or one in ten workers, have applied for jobless claims since the start of nationwide lock downs last month to slow the spread of coronavirus.

In the five days through March 30, about 580,000 Canadians applied for unemployment benefits, according to a senior government official with knowledge of the matter. That brings the total claims to 2.13 million since March 16, or around 11% of the labor force.

The record spike in job losses underscores how rapidly the country’s economy has been halted by the spread of the virus, forcing businesses to shutdown. The Canadian government announced plans at the end of last week to ramp up wage subsidies to encourage businesses to keep workers on the payroll.

It’s possible the new measures may have slowed growth in jobless claims. On a daily basis, claims averaged about 120,000 in the last five days of data, a slight deceleration when compared to the nearly 160,000 in the previous 10 days.