Canadians' wages continue to rise amid a tight labour market, according to Statistics Canada.

In a report Friday, the government agency found average hourly wages rose 5.2 per cent in September, compared to a year ago. This marked the fourth month in a row that wage growth climbed more than five per cent.

Wage growth was the highest in professional, scientific and technical services (9.1 per cent), followed by accommodation and food services (8.7 per cent), and construction (7.5 per cent).

“The contrast between two of the standout sectors in terms of wage growth -- professional and technical services, and accommodation and food services -- illustrate both how far the labour market has come since the start of the pandemic, and how it’s changed,” said Brendon Bernard, senior economist at Indeed.com, over email on Friday.

“Jobs in accommodation and food services remain way down, but pay is increasing quickly. While this could partly reflect wage hikes by employers to attract workers back to the sector, gains were concentrated in provinces which raised the minimum wage this year.”

Bernard also said the number of people working in professional, scientific and technical services “has soared, which could be approaching a limit, potentially pushing up wages instead.” 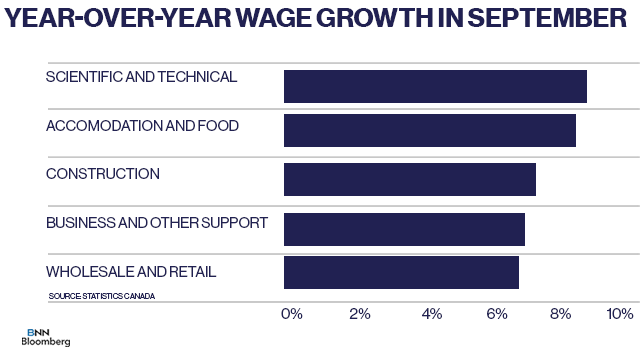 Here’s how wage growth looked across other sectors, on a year-over-year basis: