Government needs a long-term strategy to get the deficit back to balance: CIBC's Shenfeld

After a rally that saw it recover more than three quarters of the jobs lost early in the pandemic, Canada’s labor market rebound is coming to a halt.

That’s the broad consensus among economists in a Bloomberg survey, who predict the nation added just 20,000 new jobs in November, a fraction of the average monthly gain of almost 400,000 created since the economy’s collapse in April. That would leave employment well below pre-pandemic levels. Statistics Canada releases official figures Friday at 8:30 a.m. in Ottawa.

The stall reflects a wave of new virus hot spots that have emerged across the country in recent weeks, forcing local authorities to impose targeted restrictions on businesses to curb the spread. Even without the new lockdowns, a slowdown had been widely expected with the economy entering a drawn out recuperation phase that could take years to play out.

“We had some pretty impressive numbers earlier but I think November is payback month,” Craig Wright, chief economist at Royal Bank of Canada, said by phone. “Given the impact of closures, you’re going to see the sectors that have been closed bearing the brunt of the weakness in November.”

Wright predicts a loss of 50,000 jobs in November. That’s at the low end of the 13 economists in the survey. 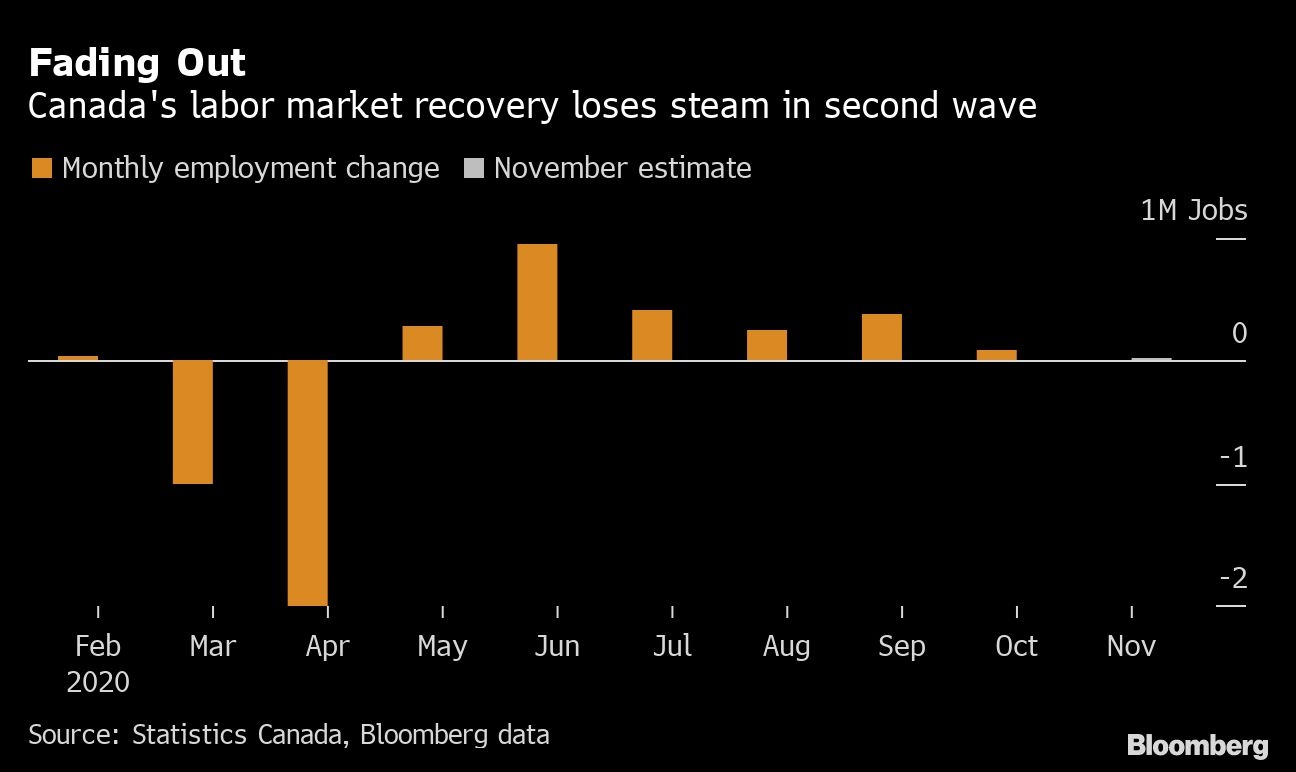 Unlike previous months, there’s a narrow range of deviation among the forecasters, with no one expecting any major upside surprise on the jobs front. The Bank of Montreal is at the high end, with an estimate of 60,000 new jobs.

Economists are also forecasting the unemployment rate in November will be unchanged at 8.9 per cent.

The numbers in November may actually understate the impact of closures, as the country’s financial capital Toronto went into a second lockdown later in the month.

Wright said he believes industries that have been hardest hit by job losses will continue to be the most vulnerable, even as other sectors return to pre-pandemic levels of employment. Of the just over 600,000 jobs still lost since the start of the lockdowns, more than one-third are in accommodation and food services.

“It’s going to be a bifurcated recovery,” Wright said. “Some will be moving ahead and others will still be at risk of being left behind.”

Some economists worry this will be as good as it gets for months.

Stefane Marion, chief economist at National Bank of Canada in Montreal, said he expects the unemployment rate to hold at around 8% for the next 12 months until a vaccine is widely available.

“That’s the best we’re going to achieve for the foreseeable future until a vaccine is deployed and you can normalize the industries most impacted,” Marion said by phone.