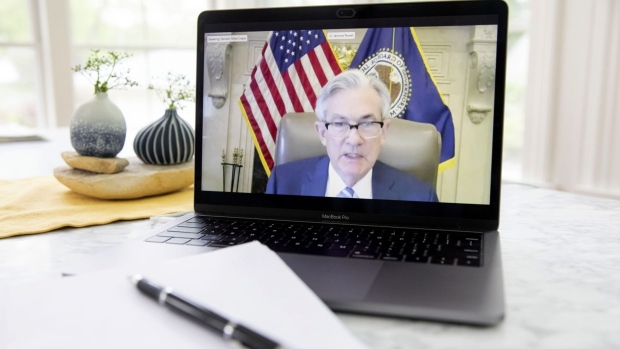 Jerome Powell, chairman of the U.S. Federal Reserve, speaks during a virtual Senate Banking Committee hearing seen on a laptop computer in Tiskilwa, Illinois, U.S., on Tuesday, May 19, 2020. Bloomberg/Daniel Acker

This week has started where last week left off for financial markets and policy makers — that is, trying to assess how much of Friday’s surprisingly good U.S. jobs report is real and how much of it could end up being a head fake. Although markets are not waiting for the answer, and understandably so given the deep win-win conditioning they have embraced, policy makers are in a tougher situation. This is particularly the case for Federal Reserve officials, who are preparing for their two-day policy meeting starting Tuesday. In addition to parsing the latest employment data, they have to deal with the added complexity of the significant bear steepening in the Treasury market yield curve recently.

As detailed here, the impressively strong jobs report may be a function of some combination of the following: A notably resilient U.S. economy that is already picking up steam, the impact of policy measures such as the Paycheck Protection Program, and data issues that may be subject to revision. It’s unlikely that we will be able to sort out with confidence the relative contributions of these three factors before the next monthly jobs report at the earliest.

Markets are not waiting for such resolution, and for good reason. The dominating narrative in the marketplace remains that risk assets will gain from either a strong or weak economy because central banks will have no choice but to provide additional exceptional support in the event of a disappointment. With that, asset prices have continued to move higher after the jobs report, especially those for heavily lagging “reopening stocks.” In doing so, they continue to outpace the improvement in the real economy in a striking fashion.

The resolution question is trickier for policy makers. With some politicians already suggesting that Friday’s report reduces the need for more stimulus, this puts even greater pressure on the Fed when officials are also trying to decipher the recent move up in yields coupled with significantly steeper for two- and 10-year and two- and 30-year Treasury curves. Specifically, Fed officials need to determine the relative contributions of higher growth expectations, larger Treasury bond issuance because of the expanding fiscal deficit and lower investor demand because of skepticism about Treasuries’ traditional effectiveness to hedge portfolios.

For the reasons detailed here, I felt even before the jobs report that, when it comes to new exceptional policy announcements this week, the Fed should stay on the sideline for now and instead focus on making the Main Street Lending program operational as soon as possible. After all, markets are functioning well, liquidity is high, risk asset prices have been surging, and there is no evidence that tight financial conditions are holding back economic activity. With the possibility that the jobs report may reflect a faster-than-expected economic pickup, there would be even less of a case for doing so.

Having said that, I’m far from convinced that this is what the Fed will do. The central bank’s exceptional activism has been driven by two self-reinforcing narratives: “go big” and provide “insurance,” both of which have been reinforced by concerns about destabilizing markets lest that add to the economic challenges. If this mindset continues, the central bank could well be inclined to strengthen its policy guidance this week beyond the publication of the revised blue dots while continuing to signal that it is also looking into other possible measures, such as yield-curve control. In doing so, it would risk exacerbating the disconnect between the real economy and markets that, in turn, risks fueling potentially disruptive economic, financial, institutional and sociopolitical risks.

Mohamed A. El-Erian is a Bloomberg Opinion columnist. He is the chief economic adviser at Allianz SE, the parent company of Pimco, where he served as CEO and co-CIO. He is president-elect of Queens' College, Cambridge, senior adviser at Gramercy and professor of practice at Wharton. His books include "The Only Game in Town" and "When Markets Collide."