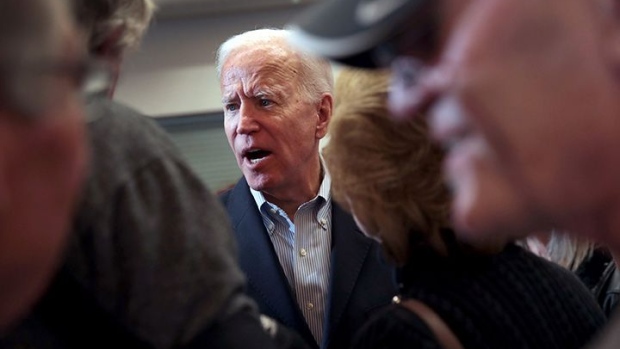 (Bloomberg) -- Democratic presidential candidate Joe Biden left rural Iowa for the penthouses of New York for a six-figure night of fund-raising, sticking to a brief stump speech as he collected cash to keep his campaign afloat in key early voting states.

His approach was as different as the locations. In Iowa’s small cities he’s discussed shared values. In Manhattan, he flattered the donors from the worlds of finance, diplomacy and art by telling them they were “one of the most sophisticated audiences I’ll ever speak to.”

Biden has hustled to boost his fundraising after a lackluster third quarter and on Monday his campaign said it raised $15 million in October and November, the same amount it took in during the summer. Biden has kept up a steady pace of fundraising events where tickets go for as much as the maximum $2,800 per person.

Alan Patricof, 85, managing director and co-founder of Greycroft Partners LLC, introduced the candidate Tuesday night, telling the mostly 60-plus crowd that Biden has an advantage over some -- though not all -- of his opponents.

“What’s so bad about having someone with experience, leading the country in these challenging times?” Patricof said of the 77-year-old former vice president. “I, for one, am someone who keeps saying, you know, experience is not so bad. It counts.”

Patricof endorsed Biden a few months ago, arguing that he was best positioned to beat President Donald Trump, and activated his donor network. He held his event Tuesday at the art-filled apartment of Milly and Arne Glimcher, founder of Pace Gallery.

An Alexander Calder mobile hung from the ceiling of the two-story living room, while a giant three-way electrical plug sculpture by Claes Oldenburg hung at another. Patricof warned the guests to be careful around the big canvases by the Glimchers’ late friend Mark Rothko. “Please don’t touch the Rothko. You can touch anything else,” he joked. “Not the Rothko.”

Biden seemed impressed, thanking the Glimchers for “opening your museum for me” and quipping that it was “worth the trip for no other reason just to walk around.”

Other hosts for the event included Thomas H. Lee, chairman and co-founder of Lee Equity Partners LLC; Anne and Vincent Mai, founder and chairman of Cranemere LLC; Ellen and Richard Richman, founder and CEO of the Richman Group Inc.; Jay Snyder, principal of HBJ Investments LLC; and Michael Kempner, founder and CEO of the public relations firm MWWPR. Donald Blinken, a former U.S. ambassador to Hungary and co-founder of E.M. Warburg, Pincus & Co., was also at the event and drew praise from Biden for raising his longtime foreign policy adviser Tony Blinken.

“Joe’s someone who many of us here consider to be an old friend and someone with whom we are very comfortable. And I think that’s an important word to say this day,” Patricof said. Later, he added that Biden is “someone who also I think will make, and is making, people comfortable all around the country.”

The second fundraiser was held at the home of David A. Steinberg, founder and CEO of marketing firm Zeta Global Corp. Michael Blackson, an actor and comedian who was a guest of the host, caught Biden’s attention with his calf-length red, purple and gold Versace puffer coat.

“The key to success is hiring and working with people smarter than you and who can dress a hell of a lot better than you,” Biden said after spotting two former staffers as well as Blackson in the crowd of 65 donors. “I tell you what man, we ought to go on the road together,” he told Blackson.

After he wrapped up, he headed out back on the road for a late-night return to Iowa -- without Blackson or his colorful coat.

To contact the reporter on this story: Jennifer Epstein in New York at jepstein32@bloomberg.net

To contact the editor responsible for this story: Wendy Benjaminson at wbenjaminson@bloomberg.net