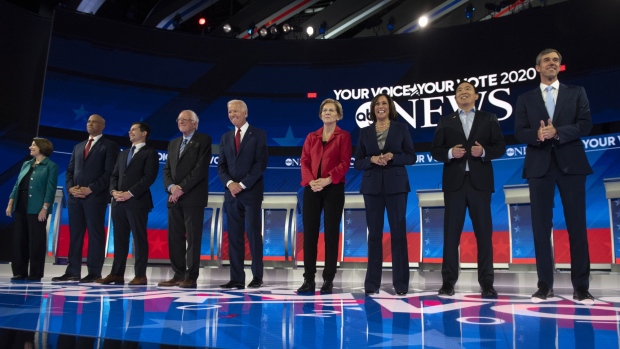 Much has been made of Joe Biden’s shortcomings as the candidate to lead Democrats back to the White House in 2020. But no one has been able to knock him off his front-runner perch.

In fact, Biden’s rivals at last night’s debate in Houston went easier on the former vice president than in the last televised showdown in Detroit. The reason is tactical: Party officials have warned that criticizing Biden could turn off voters, best to keep the focus on Donald Trump.

On trade, the candidates united in attacking the president's erratic approach to negotiations with China.

But when it came to health care, there remains a schism that Biden would need to navigate if he becomes the nominee. The left wing — led by Elizabeth Warren and Bernie Sanders — are pushing a government-run health care plan. Biden and other moderates want to build on Obamacare.

The issue dominated the third debate, the first in which all 10 of the leading contenders shared the same stage.

Lower-polling candidates made occasional efforts to break out without much success. By the next debate, the field will likely narrow further. Meanwhile, Biden is yet again showing he has staying power.

Climate costs | With the new European Commission setting out its stall to lead the global fight against climate change, EU finance ministers are brainstorming in Helsinki on how to raise the hundreds of billions of euros they’ll need to zero out emissions by 2050. In a sign of the battles ahead, Angela Merkel’s party in Berlin is tussling with its coalition partner to try to shield her budget legacy from the impact of Germany’s climate plan.

Brexit lies | Life for U.K. Prime Minister Boris Johnson keeps getting harder, and now he’s been forced to publicly deny he lied to Queen Elizabeth II about the reason he got her to rubber-stamp the suspension of Parliament. He says it was needed to work on the domestic agenda but critics and a Scottish court ruling say he misled the country’s constitutional figurehead and tarnished the crown.

Peeping Bibi | Israel has probably been planting listening devices near the White House, according to a report in Poltiico. Prime Minister Benjamin Netanyahu dismissed the explosive allegation as a “blatant lie” and Trump said it was “hard to believe.” But it wouldn’t be the first time Israel has been caught in an espionage case in the U.S. and, if true, it could complicate one of the world’s most iron-clad alliances.

French pivot | Emmanuel Macron spent the first two years of his term focused on trying to revamp Europe. Now, with a new adviser at his side, the French president is shifting his foreign policy priorities to the Middle East. Helene Fouquet and Greg Viscusi unpack their efforts to bring Iran and the U.S. back to the negotiating table ahead of the United Nations General Assembly later this month.

Overcoming obstacles | Tunisia is holding presidential elections on Sunday, and among 26 candidates vying for the top job is the first-ever presidential candidate for the country's leading religious party. Samer Khalil Al-Atrush looks at the challenges in a region where Islamists have been overthrown and thousands of their supporters jailed in the past decade.

And finally… Zimbabwe has yet another problem to add to its already-long list: a water shortage in the nation’s second-biggest city of Bulawayo. Residents are already grappling with shortages of food, gasoline, electricity and even medicine. Now crumbling pipes and pumping stations — and a severe drought emptying reservoirs — has forced the local government to ration water, Brian Latham and Godfrey Marawanyika report.

--With assistance from Paul Richardson.

To contact the editor responsible for this story: Flavia Krause-Jackson at fjackson@bloomberg.net, Caroline Alexander