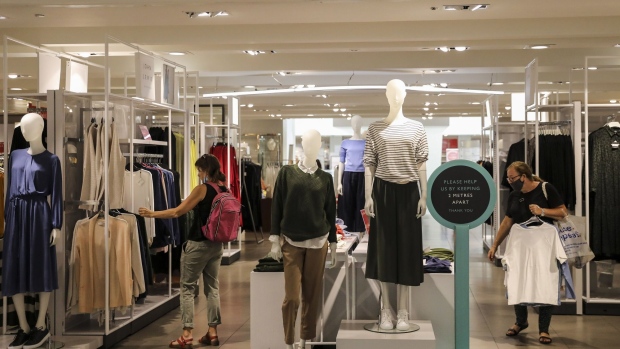 A sign displaying social distancing guidelines stands in the womenswear department inside a John Lewis Partnership Plc department store in London, U.K., on Thursday, July 23, 2020. U.K. Prime Minister Boris Johnson had resisted making masks mandatory until July 13, when his government announced that face coverings will be compulsory in stores as of July 24. Photographer: Simon Dawson/Bloomberg , Bloomberg

John Lewis Partnership Plc’s loss narrowed in the first half as the British retailer’s turnaround efforts started to pay off.

The operator of the John Lewis department store and upmarket grocer Waitrose said the 29 million-pound ($40 million) pretax loss came after taking almost 100 million pounds of exceptional costs related to store closures and redundancy payments. This is a significant improvement on the 635 million-pound loss the partnership recorded at the same time last year, when it wrote down the value of John Lewis stores amid an industry-wide shift to online.

The partnership is co-owned by more than 80,000 employees and owns 331 Waitrose supermarkets and 34 John Lewis stores. Long known as the reliable choice for middle-class Britons and lauded for its “multi-channel” retailing and service levels, it has come unstuck in recent years, weighed down by expensive stores and far more nimble rivals, particularly online. A difficult first half for the employee-owned partnership comes hard on the heels of the group’s first-ever annual loss in March when the group also cancelled annual bonuses for the first time in more than 70 years.

Sharon White, a former telecommunications regulator who joined the partnership as chair last year, is leading the turnaround. Her plan aims to cut annual costs by 300 million pounds by next year and return the company to profit by 2025. This strategy has involved replacing several key management roles, closing stores and cutting more than 5,000 roles from the business to improve productivity and profit.

The partnership is also planning to invest in the digital business and pursue new revenue streams, such as expanding further into financial services and converting excess space into private rented housing. The group hopes that 40% of its profits will come from outside the retail sector by 2030.

White did not give a profit forecast for the full year but said much of the group’s performance is skewed towards the second half, which includes the vital Christmas season. When exceptional costs are stripped out, it is clear the group’s profit is starting to recover, she said.

Waitrose’s like-for-like sales were up 4% in the first half compared to last year, largely driven by increased demand for online shopping, a trend that accelerated during the pandemic. John Lewis, the laggard of the two brands currently, also recorded an improvement in trading with like-for-like sales up 13% on last year. In an example of the growing importance of online, almost 75% of John Lewis’s sales took place on the Internet.