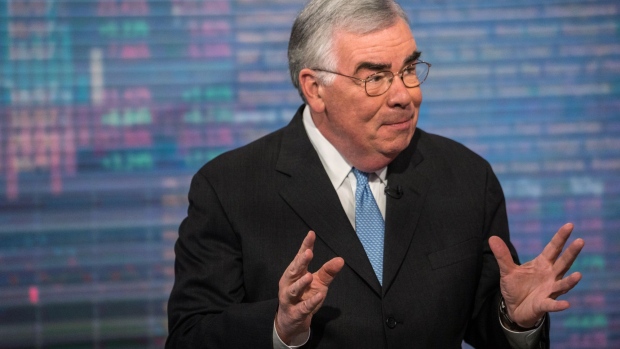 (Bloomberg) -- John Manley, an equity strategist who was renowned on Wall Street as much for his sharp wit as his takes on the market, has died. He was 68.

Manley died on May 2 at his home in La Quinta, California, of natural causes, according to an obituary written by his family.

Manley spent more than four decades analyzing markets, starting out at Smith Barney in 1979 before eventually landing the role of chief equity strategist at Wells Fargo Funds Management Group, which is now Allspring Global Investments. His career included stops at UBS Wealth Management and Claremont Investment Partners, according to his LinkedIn page.

With a reputation as a seen-it-all veteran of the Street, the graduate of Stanford University and Boston College Law School was tapped for frequent media appearances to discuss financial markets and investment strategy. For years, he was a fixture on outlets including Bloomberg and CNBC.

“He’s probably the smartest and most thoughtful person I ever met in my life,” said his son Jack Manley, who himself is a global market strategist at JPMorgan Asset Management. “He knew everything about everything. He was an encyclopedia.”

In an industry where it often seems like personal anecdotes are traded as much as financial assets, Manley built up a rich portfolio over the years. Jack recounted a story passed along by a friend of his father’s about how John once phoned a colleague at Smith Barney and impersonated a television anchor. He managed to stay in character even as he conducted an outrageous faux interview that left colleagues in stitches.

“Everybody was trying to swallow the laughter and he’s there with a straight face, just going at it,” Jack said. “And it was always in good fun. It was always light-hearted.”

Manley’s good humor was not lost on the reporters who covered Wall Street, and as a result he was sometimes called upon for strategic advice on issues other than what to buy and sell. In a 2016 story about how business was suffering at steak houses near Wall Street during a rough spell in the markets, Manley explained why there were so many empty tables.

“You don’t want to be the guy who was out to lunch when the boss went through trying to figure out who he didn’t really need,” he quipped. “There’s nothing like a little bit of a sharp correction to improve our work ethic.”

Yet it was level-headed takes on the market -- not to mention, frankly, a willingness to always answer the phone -- that kept the reporters calling and allowed the Scranton, Pennsylvania, native’s career to advance through the stock-market crash of 1987, the dot-com bubble and burst, and the global financial crisis of 2008.

As the Asian financial crisis triggered volatility in 1997, Manley’s take on the market caught the eye of John Dorfman, then a money manager for Dreman Value Management LLC who also wrote a column for Bloomberg. That quote is likely to resonate with investors dealing with this year’s volatile markets as much as it did back then.

“High valuations may not cause problems, but markets with high valuations are very susceptible to downdrafts based on seemingly minor fundamental problems,” Dorfman quoted a strategy note by Manley, then at Smith Barney. “While the seriousness of Asia’s problems should not be underestimated, the equity market’s recent drop is due, in no small measure, to investors looking for trouble.”

Amy George, who managed Manley’s many media appearances while she was at Wells Fargo from 2011 to 2016, admits the strategist didn’t need much help in getting his message out.

“John was a great storyteller, which is probably why we became fast friends more than just business colleagues,” said George, who now runs her own public-relations firm, By George Communications, in Charlotte, North Carolina. “He was an easy client because he knew everything about the markets and was unflappable.”

“I’ll never work with another like him,” she adds.

John is set to be interred with his parents in Pennsylvania after being cremated. The family is accepting remembrances sent via email to jlm.tributes@gmail.com.