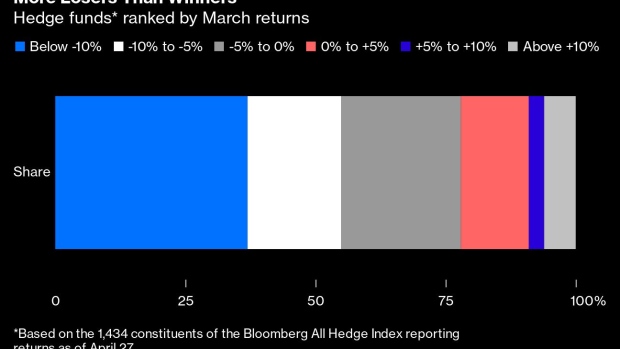 (Bloomberg Opinion) -- John Paulson, who built a personal fortune worth $4.4 billion from managing other people’s money, is returning all of his investors’ capital. Whether you’d actually want him, or any other hedge fund manager, to be looking after your cash is an interesting question, given the wildly disparate returns the industry has generated during recent market volatility.

More than three-quarters of the hedge fund community failed to make money when markets whipsawed in March, as shown by the chart above compiled by my Bloomberg News colleague Mark Glassman. Ray Dalio and Michael Hintze were among some of the most storied investors in the industry who suffered their worst-ever losses that month.

But here’s the conundrum: It’s impossible to tell in advance whether Dalio, Hintze, Howard or Rokos will beat the market. Past performance really is no guide to future returns.

Paulson made his name — and much of his money — betting against the U.S. housing market in the global financial crisis more than a decade ago. Buying insurance against defaults by subprime mortgages prior to the market collapse in 2007 netted his firm $15 billion. His track record since that win, however, has been patchy at best.

Pension funds and other asset owners who allocate capital to hedge funds are taking a leap of faith when handing over outsize fees for the alleged privilege of having a star manager oversee their assets. In recent years, their faith has been poorly rewarded.

So it’s little wonder that investors have pulled about $30 billion out of hedge funds this year, according to a report last month by data provider eVestment. BarclayHedge, another data compiler, reckons the industry as a whole oversees a bit less than $2.9 trillion, down from last year’s peak of $3.14 trillion and leaving it with the fewest assets since 2016. In the first three months of 2020, hedge funds closed at their fastest pace in four years, according to figures compiled by Hedge Fund Research:

“I look forward to continuing as an active participant in financial markets,” Paulson said in a letter to investors this week announcing that he’ll only be overseeing his own capital going forward. With that $4.4 billion fortune, according to the Bloomberg Billionaires index, arguably he’s already got enough of other people’s money.