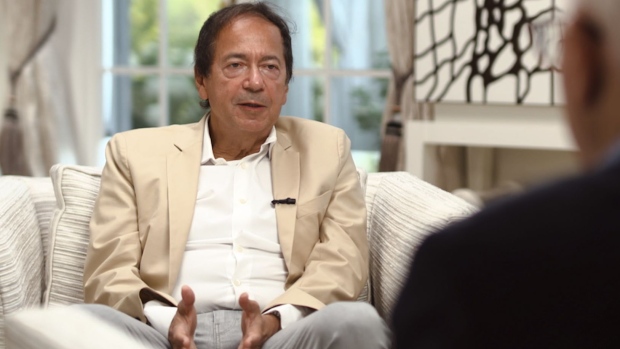 Billionaire John Paulson, president and founder of Paulson & Co., speaks during a Bloomberg Television interview at his home on Long Island, New York, on Thursday, Aug. 12, 2021. Paulson talked about the trade that made him a billionaire, gold, cryptocurrencies and inflation. , Bloomberg

(Bloomberg) -- John Paulson became a billionaire after his hedge fund effectively shorted more than $25 billion of mortgage securities at the dawn of the global financial crisis.

As he sizes up yet another frothy housing market some 15 years later, the founder of Paulson & Co. says another downturn in US home prices may be in the cards -- but the banking system is in a much better condition to handle it.

Paulson sat down with Bloomberg for a wide-ranging interview at the Union League of Philadelphia’s Business Leadership Forum on Tuesday. He also discussed how the so-called “Greatest Trade Ever” influenced his investing afterward, as well as why gold prices have been falling. Below are some of the highlights of the conversation, which have been lightly edited for clarity.

Q: You set your sights on the real-estate market about 16, 17 years ago. Basically you surmised that the US was in a housing bubble and that the huge market for mortgage securities was bound to be in trouble when prices collapsed. I’m curious if we could bring that into the present tense, because I look at how so much has changed since then: Underwriting standards have sobered up quite a bit; the banking system is much more inoculated; there are better capital requirements, a lot more regulations in place. But I look at the appreciation in home prices since the beginning of 2020 -- the Case-Shiller index is up 40-some percent -- and over the same period, mortgage rates have jumped to more than 6%. It seems like we could be in for some pain in the housing market. I wonder how well inoculated is the financial system? Compare and contrast now versus then.

A: Well the financial market, the banking system and the housing market are much different today than in ‘06 and ‘07. The underlying quality of the mortgages today is far superior. You don’t even have any subprime mortgages in the market … And the FICO scores are very, very high. The average is like 760. And the subprime, they were averaging 580-620 with no down payment. So in that period, there was no down payments, no credit checks, very high leverage. And it’s just the opposite of what’s happening today. So you don’t have the degree of poor credit quality in mortgages that you did at that time.

The other factor is the banks at that period were very highly leveraged. The average capital in your major banks was about 3%. And then they had a lot of off-balance sheet exposure as well. So, you know, it doesn’t take a lot to fail if you have, let’s say, a hundred dollars in assets, and then on the liability side you only have $3 in equity and $97 in various types of borrowing. If you’re not really careful on the asset side, all the assets have to do is fall 3% and your equity is wiped out. You go into default. So the problem, in that period of time, the banks were very speculative about what they were investing in. They had a lot of risky subprime, high yield, levered loans. And when the market started to fall, the equity quickly came under pressure.

And it caused the failure, very quickly, of major financial institutions in the US ... The banks have recovered. But as a condition going forward, they really raise the equity. Today, the average bank is probably 9% equity, the systemically important banks are 11%-12% equity. So almost between three and four times as much equity as before. So we’re not at risk of a collapse today in the financial system like we were before. Yeah, it’s true, housing may be a little frothy. So housing prices may come down or they may plateau, but not to the extent it happened.

Q: Is there anything you learned about bubbles in general? I feel like it’s one of the most-difficult things for an investor to do: It’s easy to spot a bubble, but it’s hard to sort of hit it at the right time and make the right trade to benefit from it, or at least get out of the way and cash in at the right time. Is there any lesson to be learned about bubbles or is each one unique and you have to take ‘em as they come?

A: Well, you’re absolutely right. Like crypto. Many people thought crypto was a bubble. I remember looking at Bitcoin. It was several thousand, went up to $20,000. People said, “This is ridiculous. Let’s short it.” Then it went all the way up to $65,000. So the problem with the short is there’s no way to cover the downside.

So the economics of shorting investment-grade bonds are very attractive. The problem is, it’s like finding a needle in a haystack. When does an investment grade bond default? Prior to the subprime crisis, according to Moody’s and S&P, there had never been a default of an investment-grade bond. So there was literally hundreds of billions worth of these bonds available. But I thought because of the nature of the bonds, the nature of the mortgages and the leverage on the structures, that all you needed was a flat housing market, to slightly declining housing market, when the losses in these structures would wipe out the triple-Bs.

Q: In the populist narrative, hedge-fund managers -- and short sellers in particular -- are often vilified when things go wrong. We’ve seen it a lot these last couple years with hedge funds that are short the very popular, day-trader meme stocks. I wonder if you experienced any of that? And is there anything valid to that criticism?

A: There is, if you are a short seller and you’re promoting the stock. So to short a stock, you have to get someone to buy it and you want them to buy at a high price. Then when it goes down, you make the profit. So some of these short sellers are actually promoting the stocks: “They’re fine. This is the greatest thing ever.” And they’re promoting it to very unsophisticated retail investors. And then they run the stock up. And when the stock’s going up, they’re shorting the stock that they’re promoting to the unsophisticated retail investors. And then once the stock reaches a point, they maximize the short, then they pull the plug and stop promoting it.

Subprime was very different. First of all, a lot of our investors were pensions, endowments, families. We provided balance to a lot of institutions that, when the market fell, they had something that made money that minimized the overall losses in the portfolio. And secondly, we never dealt with retail investors. Our counterparties were only the most-sophisticated banks. So our lead counterparty was Goldman Sachs, after that was Deutsche Bank, after that Morgan Stanley, after that Credit Suisse, UBS. So there was no hiding. They knew exactly what they were buying from us. They understood the market better than I did. And we never promoted these bonds. We were very clear: We thought these were very poor mortgages.

Q. I wonder what it’s like after you have a trade that successful. Like if you’re a fisherman and you catch a whale, all of a sudden it must be tough to go back to fishing for trout. Was it difficult in the aftermath, psychologically, to think “I’m a home-run hitter” now?

A. Yeah, I think it is. You know, you did so well, you look for the next one. But it’s pretty hard to find. And you become a little overconfident so that you’re perhaps taking more directional risk. And, if you take directional risk, it can go either way. And then, you have sustaining losses, which makes you more humble. You can come back to reality and you become more realistic about finding another. You continue to look, but it’s difficult to find another trade that sets up like this one.

Q: Can you help us understand what’s happening to gold now? Will it keep dropping?

A: One thing about gold is that it’s down this year, more or less 8%. It’s down a lot less than stocks or bonds. So it has proven to be a source of protecting wealth. The issue is gold’s a hedge against inflation, but while the current inflation rate is high, long-term inflation expectations are still very low. It’s like 2.5%. And they haven’t really changed while the Fed has been raising interest rates. So as the 10-year yield has gone from 2% to, let’s say, 3.6%, inflation expectations still are around 2.5%. So before real rates were negative, now they become positive. So because real rates have become positive, that’s really put a cap on gold.

I think what needs to happen for gold to become more responsive is if the Fed ultimately raises rates, the economy weakens, and they pause. And then they see they can’t control inflation. Then it’s not going to come down to 2%, at best. Maybe they get it down to 4%, 5% or 6%, and then the economy weakens, they have to ease again. And then inflation comes back. At that point long-term inflation expectations will rise. People will not believe the Fed can control it. And then I think gold rises to higher levels.