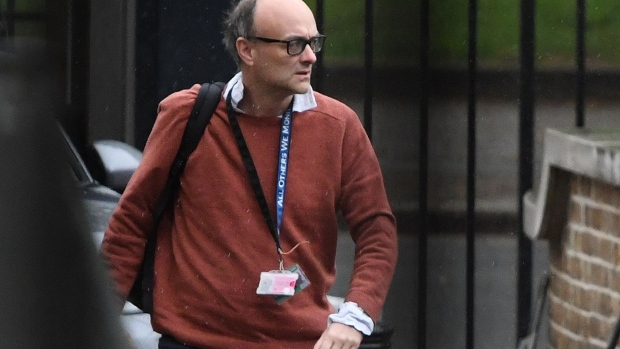 U.K. Prime Minister Boris Johnson’s chief adviser Dominic Cummings “believes he behaved reasonably and legally” over lockdown rules, according to a statement from an unidentified spokesman for 10 Downing Street.

Cummings was interviewed by police for potentially breaking the U.K. government’s lockdown rules when he self-isolated with coronavirus symptoms, the Mirror and the Guardian reported after a joint investigation.

Police spoke to Cummings, a behind-the-scenes figure within Johnson’s administration, after he was seen more than 250 miles (400 kilometers) from his London home shortly after he went into isolation at the end of March -- a time when the prime minister and Health Secretary Matt Hancock had both tested positive, the newspapers reported.

In the statement released on May 23, No. 10 said “at no stage was he or his family spoken to by the police about this matter.”

“Owing to his wife being infected with suspected coronavirus and the high likelihood that he would himself become unwell, it was essential for Dominic Cummings to ensure his young child could be properly cared for,” the emailed statement reads.

“His sister and nieces had volunteered to help so he went to a house near to but separate from his extended family in case their help was needed. His sister shopped for the family and left everything outside.”

“His actions were in line with coronavirus guidelines. Mr Cummings believes he behaved reasonably and legally.”