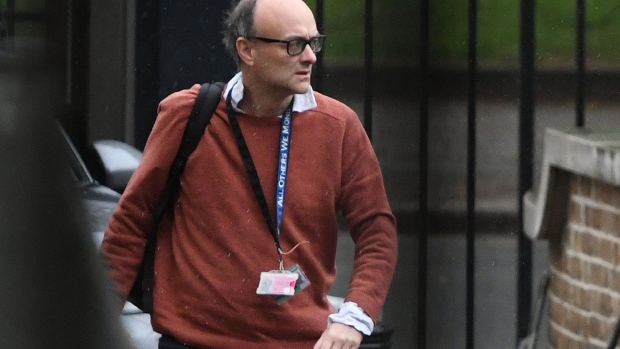 (Bloomberg) -- Boris Johnson’s chief adviser was interviewed by police for potentially breaking the U.K. government’s lockdown rules when he self-isolated with coronavirus symptoms, the Mirror and the Guardian reported after a joint investigation.

Police spoke to Dominic Cummings, a divisive behind-the-scenes figure within Johnson’s administration, after he was seen more than 250 miles (400 kilometers) from his London home shortly after he went into isolation at the end of March -- a time when the prime minister and Health Secretary Matt Hancock had both tested positive.

At the time, U.K. citizens were under orders not to travel, and to stay at home. Cummings lives in London while his parents live in Durham, in northern England. It’s never been clear where he was holed up. Durham police followed up on reports that an individual had traveled from London and was at an address in the city.

“Officers made contact with the owners of that address who confirmed that the individual in question was present and was self-isolating in part of the house,” said a spokesman for Durham Constabulary.

The episode could further complicate the government’s initial attempts to communicate how it will relax the lockdown. Recent polls show support is waning for Johnson’s response to the virus, which has killed more than 36,000 people in the U.K., the world’s second-highest tally behind the U.S.

Various senior officials, including a member of the government’s scientific advisory group, have been forced to resign for failing to observe the strict lockdown rules. In Scotland, the chief medical offer resigned in April after making two trips to her second home.

Ed Davey, acting leader of the Liberal Democrats, tweeted that Cummings should step down if he’s found to have flouted the guidelines.