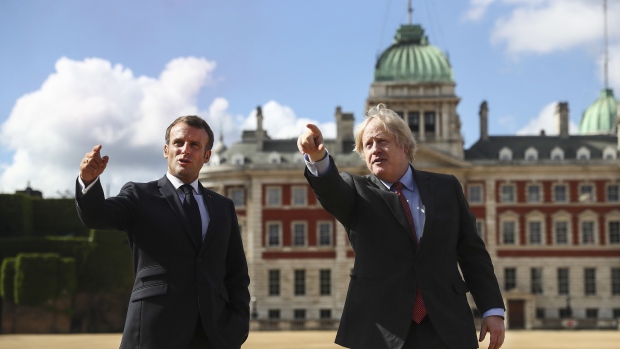 (Bloomberg) -- French President Emmanuel Macron unveiled his ambitions for a broad new European political grouping last month. Now UK Prime Minister Boris Johnson appears to have taken ownership of it -- and he wants to include Turkey.

“I actually claim paternity of this idea,” Johnson told reporters traveling to the NATO summit in Madrid on Tuesday. “I had this idea back when I first became foreign secretary.”

But he conceded the two men, who regularly differ on policies and Europe’s future, may have “different ideas” about who should join. Macron has said the new bloc should include countries wanting to join the European Union, such as Ukraine, Moldova and Georgia.

New joiners should share Europe’s “democratic values,” Macron told members of the European parliament in May. That raised question marks over the potential inclusion of Turkey, which has long aspired to join the EU but has been criticized over human rights violations.

Macron has made the European political community a flagship priority of his foreign agenda. He and his teams have been trying to build support for what they promote as a way to bring together countries from Iceland to the Western Balkans. But the proposal has been met with skepticism as many EU leaders see it as vague and complicated.

Johnson, in contrast, wants to “rebuild the whole concept” of a European alliance. “I think that Turkey should be there,” the UK premier said, adding its role in a wider debate was “crucial.”

He pointed to the north-west Africa region: “I think that Magreb should be there and I think we should basically be recreating the Mare Nostrum of the Roman Empire.”

That appeared to be a far-wider vision for a new European grouping than Macron’s. “I think possibly what’s going on here is that there are several different ideas,” Johnson said. “I think possibly rather than inventing new structures, let’s look at building up relationships.”

The two men appeared to be on good form at the summit of Group of Seven nations in the Bavarian Alps, drinking whisky together after a group dinner on Sunday. Johnson’s officials said Macron had offered to host the UK premier at the Elysee Palace soon for longer discussions on policy.

That could include attempting to resolve tensions over asylum seekers crossing the English Channel from France -- an issue they both conspicuously avoided during a G-7 bilateral meeting.