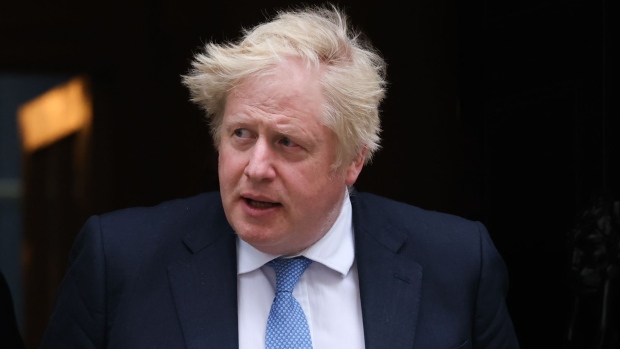 Boris Johnson, U.K. prime minister, departs from number 10 Downing Street on his way to make a statement in Parliament in London, U.K., on Tuesday, April 19, 2022. Johnson is expected to apologize to Parliament after receiving a fine for breaking pandemic lockdown rules, as he tries to draw a line under “partygate” even as he faces the risk of further penalties. , Bloomberg

(Bloomberg) -- Boris Johnson batted away UK media speculation that he supports rolling back a planned increase in corporation tax next year, saying his government needs to be “responsible” in its fiscal policy.

Asked whether the government still plans to raise the levy to 25% from 19% next spring, Johnson told reporters on Tuesday that it’s a matter for Chancellor of the Exchequer Rishi Sunak. While he didn’t deny that he might support a reduction, he also pointed to other measures the government has announced, including slashing fuel duty and raising the floor at which people begin paying national insurance, a payroll tax.

“Next month we’ve got tax cuts coming in for people up and down the country; we’ll do whatever we can to help people through the cost-of-living crisis,” Johnson told reporters on a plane as he shuttled between the G-7 summit in southern Germany and a NATO meeting in Madrid. “We’ve got to be sensible, we’ve got to be responsible.”

Johnson’s remarks come amid growing calls from members of his own Conservative backbenchers to lighten the UK tax burden, which is on track to its highest level since the 1950s. That’s anathema to the party’s traditional low-tax philosophy, and Tory MPs have called for cuts in personal tax in particular, as Britons face up to a growing cost-of-living crisis, with inflation predicted to hit double digits by year-end.

Even so, Sunak’s plan on corporation tax -- announced in 2021 as he sought to repair finances that had been battered by the coronavirus pandemic -- has also attracted the ire of rank-and-file Tories. The chancellor himself has said he believes in lower taxes and has promised to set out “a range of tax cuts and reforms to incentivize businesses to invest more” in the fall.