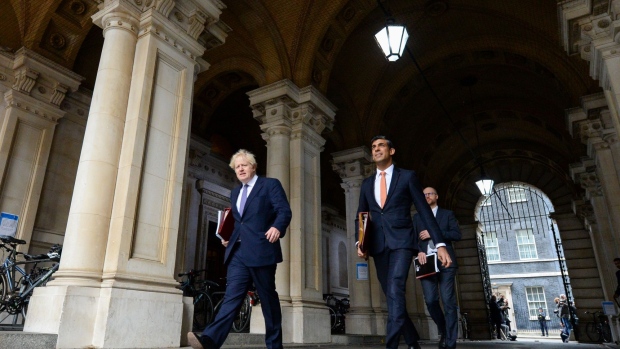 Boris Johnson, U.K. prime minister, left, and Rishi Sunak, U.K. chancellor of the exchequer, center, arrives for a weekly meeting of cabinet ministers in London, U.K., on Tuesday, Oct. 13, 2020. U.K. Prime Minister Boris Johnson announced bars and pubs will be closed in the worst-hit parts of England from Wednesday to control a surge in coronavirus, but his top health adviser said it won’t be enough. , Bloomberg

(Bloomberg) -- U.K. Prime Minister Boris Johnson wants to increase foreign aid spending next year in a move that is at odds with U.K. Chancellor of the Exchequer Rishi Sunak, according to The Times.

The U.K government said in November it would cut foreign aid spending from 0.7% to 0.5% of gross domestic product this year as a result of the pandemic’s economic damage to the country’s finances. The move was controversial given Britain’s long history of foreign aid.

The prime minister wants to reinstate the 0.7% target next year but this is being resisted by Sunak, who wants the option of extending the lower spending target for another year if the economy is still struggling, the newspaper said, without naming any sources.

Johnson is currently facing a legal challenge backed by some Tory politicians over the planned cuts, the paper said. The prime minister has ruled out giving parliament a vote on reducing the legally binding target after stating that the cut was “compatible” with legal commitments.

U.K. Foreign Secretary Dominic Raab is supportive of the prime minister’s push to restore the 0.7% target next year, The Times said. The foreign ministry didn’t immediately respond to an email seeking comment.