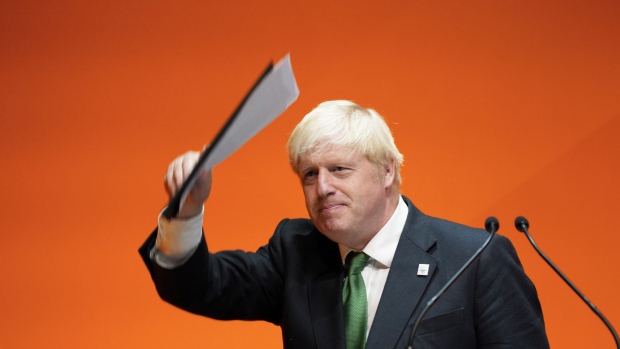 (Bloomberg) -- The UK will defer a decision on further support for ordinary Britons struggling with the rocketing cost of living until a new premier is in place in September, Boris Johnson’s spokesman said, batting away the suggestion that the prime minister is missing in action.

While Johnson “recognizes” the scale of the problem, “some of the future challenges on people’s finances are due to come in towards the end of the year,” after either Foreign Secretary Liz Truss or former Chancellor of the Exchequer Rishi Sunak has been appointed as the new prime minister, spokesman Max Blain told reporters on Monday. He said £37 billion ($45 billion) of support is already being phased in, to match that time-line.

“By convention, the prime minister in this scenario does not make significant fiscal interventions,” Blain said, referring to the Conservative Party leadership contest to replace Johnson.

That stance raises the risk that the ruling Tories are seen as delaying their response to the looming economic crisis. The Bank of England warned last week that inflation is set to jump above 13% later this year, and predicted a recession lasting more than a year, piling pressure on struggling households.

But Blain said there are no plans to recall Parliament or offer some form of emergency intervention, as proposed by former Prime Minister Gordon Brown at the weekend.

Both Truss and Sunak have said they will consider further interventions beyond assistance already made available to households by Sunak when he was chancellor. Truss has suggested she would prefer any future help to come in the form of tax cuts rather than handouts.

Government departments would take heed of the two candidates’ commitments as they make preparations for the result of the Tory leadership contest, Blain said. The winner is due to be announced Sept. 5, before taking power the following day.