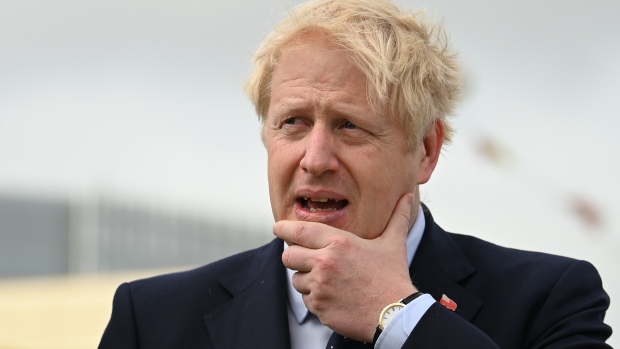 (Bloomberg) -- Boris Johnson’s Brexit troubles deepened as he denied lying to Queen Elizabeth II and the speaker of the House of Commons warned him against illegally forcing Britain out of the European Union.

Faced with a Scottish court ruling that he acted unlawfully when he advised the queen to suspend Parliament, the prime minister said Thursday he “absolutely” didn’t lie about the reasons.

Johnson repeated that the five-week suspension was needed to work on the government’s domestic agenda, though the court ruled that his purpose was to “stymie” Parliament.

While Johnson has said he’d rather die than ask the EU for a delay to Brexit, members of Parliament passed a law last week saying he must ask for an extension if he doesn’t get a divorce deal by Oct. 19.

Government lawyers have been asked to find ways around the law, but John Bercow, the outgoing Speaker of the House of Commons, said Johnson would be acting like a “bank robber” if he refused to delay Brexit. He suggested the U.K. may need a U.S.-style written constitution to keep the government from trying to skirt laws passed by Parliament.

Bercow has been a thorn in the side of the government by allowing Parliament time to pass laws on the future of Brexit. On Thursday, he suggested he’d continue to help MPs who want to stop a no-deal Brexit, until he leaves his post on Oct 31.

“I would imagine that Parliament would want to cut off such a possibility and to do so forcefully,” Bercow said in a lecture at the Bingham Center for the Rule of Law in London. “If that demands additional procedural creativity to come to pass, it is a racing certainty that this will happen and that neither the limitations of the existing rulebook nor the ticking of the clock will stop it doing so.”

Legal challenges are piling up as Johnson seeks to pry Britain out of the EU on Oct. 31 “come what may.”

While he won a Belfast court case related to the Irish border on Thursday, his opponents mounted another. Labour Party donor Dale Vince is filing papers seeking an immediate order that Johnson comply with the Brexit delay law.

Johnson said he’s hopeful of striking a deal with fellow leaders at an EU summit on Oct. 17-18.

“We can see the rough area of landing space of how you could do it,” he said in a television interview. “It will be tough, it will be hard, but I think we can get there.”

EU lawmakers on Thursday signaled willingness to change the Irish border arrangement proposed in the draft Brexit deal, known as the backstop, to make it apply solely to Northern Ireland, rather than to the U.K. as a whole. Johnson said Wednesday he wasn’t ready to accept that option.

One intriguing way out for Johnson would be a veto by an EU government against granting the U.K. another Brexit delay. That could allow him to comply with the law passed by Parliament while also ensuring the U.K. leaves EU within the timeline he has promised.

Hungarian Foreign Minister Peter Szijjarto on Thursday left the door open to potentially vetoing any U.K. request for an extension and said the EU must take Boris Johnson seriously.

Government ministers spent Thursday defending their Brexit strategy after the Operation Yellowhammer planning papers revealed the full scale of the damage a no-deal Brexit could cause, including possible shortages of food, fuel and water, public disorder and severe border disruption.

The paper undermines Johnson’s argument that the U.K. can cope with leaving the EU without an agreement in place. But Defence Secretary Ben Wallace described it as “a living document,” saying the government is working to minimize risks and will publish a progress report.

“We’re spending the money on doing lots of things to mitigate those assumptions,” Wallace told BBC Radio 4. “We should consider it as ‘This is what would happen if we didn’t do anything about it.”’

--With assistance from Alex Morales, Marton Eder and Thomas Penny.

To contact the editors responsible for this story: Tim Ross at tross54@bloomberg.net, Tony Czuczka, Robert Jameson