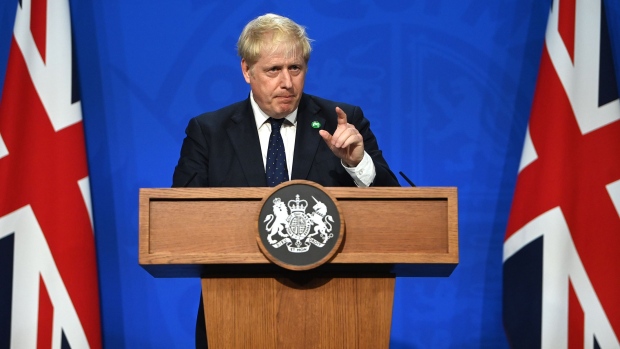 Boris Johnson, U.K. prime minister, during a news conference inside number 10 Downing Street in London, U.K., on Tuesday, Sept. 7, 2021. Johnson announced a tax hike on workers, businesses and shareholders to help rescue the National Health Service from soaring backlogs that built up during the Covid-19 pandemic and reform the "broken" social care system. , Photographer: Bloomberg/Bloomberg

“The spikes in gas prices, like many of the other supply issues we’re seeing like food, are cause by the world economy waking up after a long time in this suspended animation caused by Covid,” Johnson told ITN News Tuesday in New York, where he’s attending the United Nations General Assembly.

Asked if he accepted that people would really struggle this winter, he said: “No, because I think this is a short-term problem.”

The comments risk portraying him as out of touch with the mood in Britain, where even members of Johnson’s ruling Conservative Party have warned about the impact on households, with prices rising at the same time as the government unwinds pandemic support programs.

The flagship furlough program ends at the end of this month, while early next month the government is putting a stop to the 20-pound ($27) a week uplift in universal credit benefit payments that’s been in place through the pandemic. Chancellor of the Exchequer Rishi Sunak earlier this month announced a new 1.25% levy on workers to pay for health and social care.

Soaring wholesale gas prices have forced some smaller energy suppliers to fold and a key supplier of carbon dioxide to the food industry to close its factories. That’s led to concerns about food supplies. Johnson acknowledged that “there are some things we have to fix.”

“I don’t believe that people will be moving short of food, wages are actually rising under this government for the first time in decades and that’s a great thing,” he told the BBC in a separate interview.