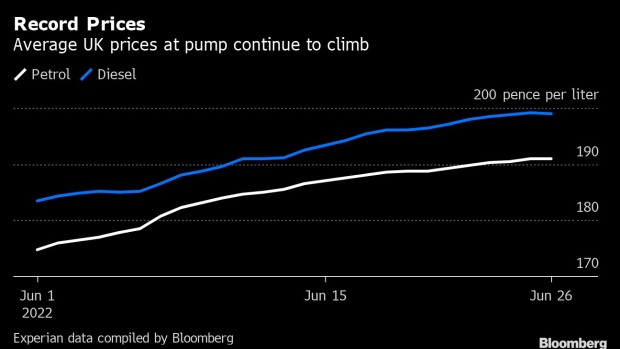 A customer fills their vehicle at a BP Plc petrol station in London, UK, on Monday, June 13, 2022. Last week, UK fuel prices surged by the most in 17 years to underscore the inflationary pressures the country faces. Photographer: Chris Ratcliffe/Bloomberg , Bloomberg

(Bloomberg) -- Boris Johnson hinted his UK government may prepare more help for Britons struggling with a surge in petrol prices, as inflation tightens its squeeze on household budgets.

Chancellor of the Exchequer Rishi Sunak cut fuel duty by 5 pence (6 cents) a liter in March as he sought to alleviate a growing cost-of-living crisis. But the impact has been wiped out several times over by a further surge in prices at fuel pumps, exacerbated by Russia’s invasion of Ukraine.

UK inflation is already at a four-decade high of 9.1%, with the Bank of England predicting it’ll peak at more than 11%.

With Britons facing the worst squeeze on living standards since the 1950s, Sunak last month announced a fresh £15 billion-package to help households cope with domestic energy costs that increased by 54% in April. Prices are set to surge further in October when the energy regulator carries out its twice-yearly adjustment of a cap on gas and power bills.