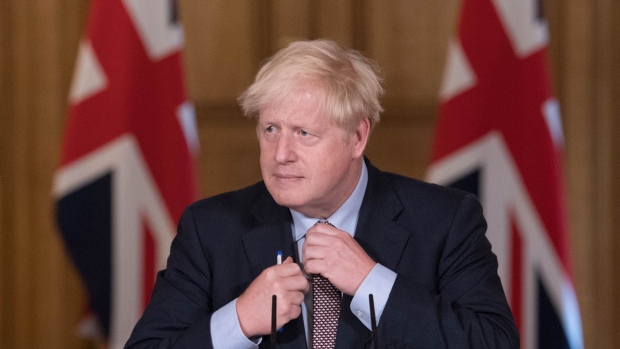 U.K. Prime Minister Boris Johnson made a key concession on his controversial Brexit law-breaking plan in a bid to get it through Parliament, as one of the government’s most senior legal officers resigned over the proposals.

After meetings with Conservative MPs who were threatening to rebel against him, Johnson agreed to give the House of Commons a veto over whether the government can exercise its proposed powers to override parts of the Brexit divorce treaty, according to a joint statement from his office and some of the potential rebels.

Johnson’s move is a minor setback to his contentious plan, which has prompted threats of legal action from the EU and been widely criticized as damaging Britain’s reputation for respecting international agreements. Johnson gave ground on the same day that Richard Keen, who had served as Advocate General for Scotland for five years, quit his post.

“I have found it increasingly difficult to reconcile what I consider to be my obligations as a Law Officer with your policy intentions,” Keen said in a resignation letter. He said the government faces challenges “on a number of fronts” and that Johnson’s legislation “will not make these any easier.”

However, by appeasing the doubters in his own party, Johnson has likely seen off any parliamentary rebellion and boosted his chances of passing the legislation, ramping up tensions with the EU. The danger is that the deteriorating atmosphere between the two sides jeopardizes ongoing trade negotiations, and the threat of a disruptive no-trade-deal Brexit -- meaning tariffs and quotas on commerce, plus an economic shock -- is looming.

Johnson’s moves have also prompted concern from across the Atlantic, with Democratic presidential nominee Joe Biden becoming the latest senior U.S. figure to warn that a U.K.-U.S. trade accord would be conditional on the Good Friday Agreement being upheld, which has secured peace in Northern Ireland.

We can’t allow the Good Friday Agreement that brought peace to Northern Ireland to become a casualty of Brexit.

Any trade deal between the U.S. and U.K. must be contingent upon respect for the Agreement and preventing the return of a hard border. Period. https://t.co/Ecu9jPrcHL

The government also said it would amend its Internal Market Bill to set “clear limits” on the “scope and timeliness of judicial review into these powers”, attempting to insulate itself from the kinds of protracted legal battles that have been a feature of the Brexit saga.

“This will provide people and businesses with the certainty that they need,” 10 Downing Street said in the joint statement.

Johnson added to the tensions with the EU on Wednesday by saying he didn’t believe the bloc was negotiating in good faith in their trade talks and that he would impose “formidable” tariffs on EU products if a free-trade agreement could not be agreed this year.

“We’re very hopeful our friends and partners will see the logic of reaching an agreement,” Johnson said to a panel of lawmakers in Parliament. “We will wait and see what they do.”

In other Brexit developments: