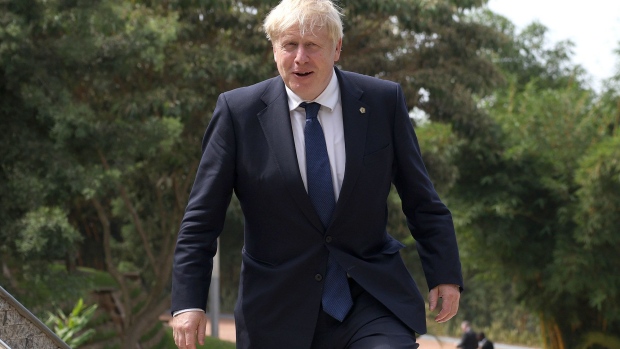 KIGALI, RWANDA - JUNE 25: British Prime Minister Boris Johnson arrives for the Leaders' Retreat on the sidelines of the 2022 Commonwealth heads of Government meeting at the Intare Conference centre on June 25, 2022 in Kigali, Rwanda. Leaders of Commonwealth countries meet every two years for the Commonwealth Heads of Government Meeting (CHOGM), hosted by different member countries on a rotating basis. Since 1971, a total of 24 meetings have been held, with the most recent being in the UK in 2018. (Photo by Dan Kitwood - Pool/Getty Images) Photographer: Dan Kitwood/Getty Images Europe , Photographer: Dan Kitwood/Getty Images Europe

UK Prime Minister Boris Johnson, who survived a confidence vote just two weeks ago, is facing fresh threats to his leadership after his Conservative Party lost two key parliamentary seats, according to reports.

Tory rebels seeking his ouster want to scrap the party’s rule that prevents another leadership poll from taking place for a year, the Times and the Telegraph reported. They’re organizing to take over an internal panel of backbenchers known as the 1922 Committee that sets party rules on confidence votes, according to the reports.

Andrew Bridgen, a Tory lawmaker, told GB News on Friday that he would stand for the committee to try to change the rules. Nominations open next week for the executive role on the 1922 Committee and the vote could be the following week, he said. Graham Brady, chairman of the committee, didn’t respond to a request for comment.

The Conservative loss in two by-elections this week poses fresh turmoil for Johnson, whose reputation has been battered by the so-called Partygate scandal, while a grinding cost-of-living crisis has seen inflation jump to a 40-year high. The nature of the losses suggested the electoral shift that swept the premier to an overall majority in 2019 may be weakening.

The setback also prompted fresh calls for Johnson’s resignation, which he rebuffed. Oliver Dowden, chairman of the Conservative Party, quit after the results were announced, saying someone had to take responsibility.

When asked about efforts to change the rules to oust him in a BBC interview that aired Saturday, the prime minister tried to label the rebels as opponents of his signature effort to take the UK out of the European Union.

“The only argument that I’ve heard some of my critics make of substance about changes they would like to see is to go back into the EU single market,” he said.

Johnson’s 2019 victory was remarkable because he won so-called Red Wall seats in northern England that had historically been controlled by the opposition Labour Party while keeping traditional Conservative seats in the south. This week’s election losses suggest this may be hard to repeat.

In Tiverton and Honiton, a rural southwest constituency held by the Tories since its creation in 1997, voters abandoned the Conservatives in droves, and the Liberal Democrats -- crucially with the help of former Labour voters -- overturned a huge majority to take the seat. Meanwhile, Labour won back the district of Wakefield in West Yorkshire, dealing a major blow to Tory strategists’ plans to build on inroads made by Johnson in the Red Wall seats.

Support for Johnson has eroded over Partygate, which saw him fined by police for attending social gatherings that violated his own government’s lockdown rules. Dozens of gatherings came under scrutiny and more than 80 people were fined for attending events on eight different dates between May 2020 and April 2021. He is also facing an investigation into whether he misled parliament in his explanations of the events.

When asked in the BBC interview whether he would ever resign over a principle of morality, Johnson said he would if his Ukraine policy failed.

“If it was put to me that we had to abandon the Ukrainian cause because it was simply getting too difficult and that the cost of supporting that people in their heroic fight for freedom was too great in terms of inflation, in terms of economy damage, I would accept that I lost a very important argument and I would go,” he said.