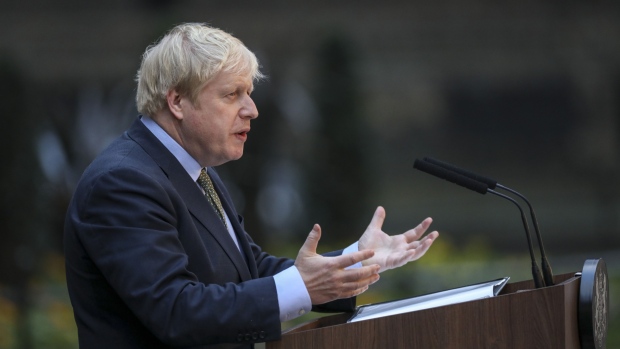 U.K. Prime Minister Boris Johnson backed away from crowdfunding for the ringing of Big Ben to mark the U.K.’s departure from the European Union on Jan. 31, opting instead for muted commemorations his office said would seek to “heal divisions and re-unite communities.”

Johnson will take his cabinet for a meeting in the north of England on the day and government buildings will be lit up, his office said in an email.

The statement made no mention of ringing the bell, in a clock tower over the Houses of Parliament in London, just four days after Johnson encouraged people to give money toward it -- even though there was no plan in place.

Members of the public have already given more than 225,000 pounds (US$293,000) toward the 500,000-pound cost of pausing urgent repair work and installing a temporary floor and equipment to enable the bell to ring.

The House of Commons authorities said they have no mechanism for accepting the money and that preparations to ring the bell would delay vital refurbishment. That intervention sparked fury from Brexiteers, who accused bureaucrats of plotting to spoil their celebrations.

Johnson’s office, which has spent the week trying to cover up the prime minister’s blunder, appeared to accept that the bell won’t ring, saying instead that a clock will be projected onto the walls of the prime minister’s office in Downing Street as the country counts down to Brexit at 11 p.m on Jan. 31.