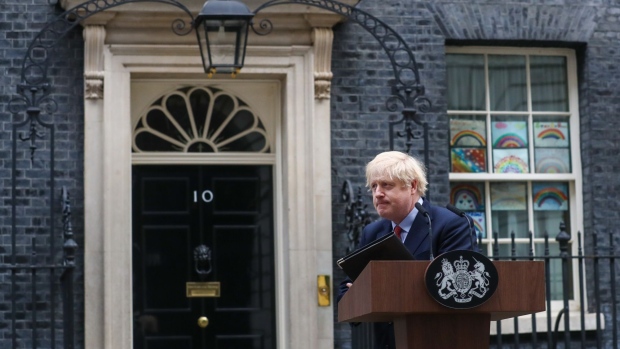 Prime Minister Boris Johnson pledged a “comprehensive plan” to lift the lockdown that has crippled the economy, as he declared the U.K. has now passed the peak of the coronavirus outbreak.

In his first press conference since recovering from Covid-19, Johnson promised to set out details next week on how businesses can get back to work, suggesting that people will be encouraged to wear face masks as the restrictions are lifted.

The prime minister’s words show the government is preparing the pathway for the swathes of the economy that have been shuttered to begin operating again, amid concern that millions of people are facing the loss of their jobs and companies are collapsing. Ministers are due to review the restrictions -- unprecedented in peacetime -- on May 7.

“I will be setting out a comprehensive plan next week to explain first how we get our economy moving, how we can get our children back to school, back into childcare, second, and thirdly how we can travel to work and how we can make life in the workplace safer,” Johnson said. “In short, how we can continue to suppress the disease and at the same time restart the economy.”

The premier, who hasn’t d a press conference since before he tested positive for coronavirus on March 26, predicted the economy “will bounce back strongly,” but also repeatedly stressed the need to avoid a second spike in virus cases that overwhelms the National Health Service while lifting the curbs.

“We’ve come through the peak, or rather we have come under what could have been a vast peak, as though we have been going through some huge alpine tunnel,” Johnson said. “And we can now see sunlight and the pasture ahead of us, and so it is vital that we do not now lose control and run slap into a second and even bigger mountain.”

England’s Chief Medical Officer Chris Whitty cautioned that, while the first phase of the outbreak is over, there remains “a very long way to run” in the fight against the virus.

The prime minister promised a “menu of options” for the lockdown, which will be deployed at different times, depending on the development of the outbreak.

“As part of coming out of the lockdown, I do think face coverings will be useful both for epidemiological reasons and giving people confidence it’s safe to go back to work,” Johnson said. “We will be saying a lot more next week and in the coming weeks about how and when we propose to unlock the various parts of the U.K. economy.”

The government has announced more than 60 billion pounds (US$75 billion) of direct aid to companies and individuals to help them weather the pandemic, and offered 330 billion pounds of loan guarantees. The Office for Budget Responsibility on Thursday said the government’s virus response has cost almost 105 billion pounds in the current fiscal year.

Asked whether the government would need a new period of austerity, including cuts to public services in order to restore the country’s finances, Johnson rejected the approach.

“I think the economy will bounce back strongly, I think that this government will want to encourage that bounce back in all kinds of ways,” he said. He added that he’d “never particularly liked” the term “austerity,” saying “it will certainly not be part of our approach.”

Earlier Thursday, Johnson’s spokesman, James Slack, shot down Justice Secretary Robert Buckland’s earlier comments to Sky News that it’s “probable” the government would miss a goal to carry out 100,000 coronavirus tests per day by the end of April, saying the target remained. Johnson said 81,611 tests had been carried out Wednesday.

Ministers are under fire for abandoning the tracing and testing of contacts of positive cases in March, as capacity was overrun by the rate of infections.

Now, they’re working to develop a program to test track and trace contacts that’s seen as vital to containing the virus as the country comes out of lockdown. Similar systems are credited with reducing the pandemic’s spread in countries including South Korea, Taiwan and Vietnam.

Work is ongoing to recruit 18,000 contact tracers, 15,000 of whom will do tasks like staffing telephones and giving advice, and 3,000 who will work in the field, Slack said. The government is also working on developing its contact-tracing app, he said.

“You can do things like track and trace at any stage of the epidemic, but it has a greater effect and a higher proportion of the heavy load can be taken by it if you’re doing it at a much lower level of numbers of cases a day,” Whitty said in Thursday’s press conference. “There isn’t a magic number, but in broad terms, the lower the number, the more effective it’ll be.”

--With assistance from Robert Hutton and Stuart Biggs.