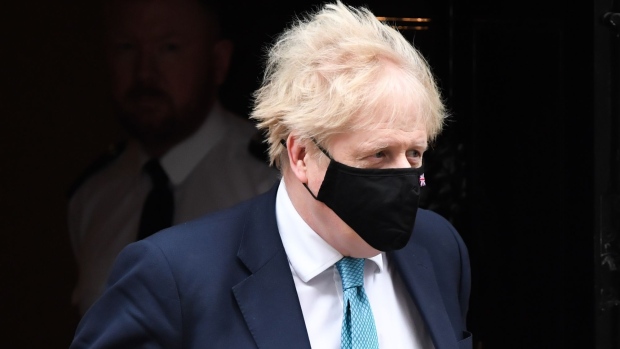 Boris Johnson, U.K. prime minister, departs number 10 Downing Street to attend a weekly questions and answers session at Parliament in London, U.K., on Wednesday, Jan. 26, 2022. Boris Johnson's supporters say the launch of a police inquiry into alleged breaches of pandemic rules in Downing Street has led prospective Conservative rebels to hold off any bid to oust the prime minister for now. , Bloomberg

Boris Johnson batted away calls from opposition Labour Party Leader Keir Starmer for him to resign over allegations of rule-breaking parties at Downing Street during lockdown.

Johnson told the House of Commons that he couldn’t comment on the matter while it’s still under investigation, and reiterated a promise to publish senior civil servant Sue Gray’s report once he’s received it. The exact timing of that has been thrown into disarray by the surprise announcement on Tuesday of a separate probe by the Metropolitan Police.

Several Conservative MPs told Bloomberg they would wait for the police to publish their findings before deciding whether to call for Johnson’s resignation. Some believe the outcry over alleged partying is overblown, when the focus should be on issues including tension with Russia and the cost of living.

Anger and frustration have ramped up within the ruling Conservative Party over recent reports of Johnson attending a birthday party and a “bring your own bottle” gathering at a time when most Britons were banned from such events by Covid-19 regulations brought in by the premier’s government. Poll ratings for the Conservatives have plummeted, prompting some Tories to publicly call on Johnson to go.

For now, Johnson has managed to keep a lid on the growing rebellion. The prime minister would face a vote on his leadership if 54 Tory MPs, or 15% of the total, submit letters calling for him to step down to a key committee. He would then need over 50% of Tory MPs to back him in a secret ballot. If he lost such a vote, a leadership contest to replace him would get under way.