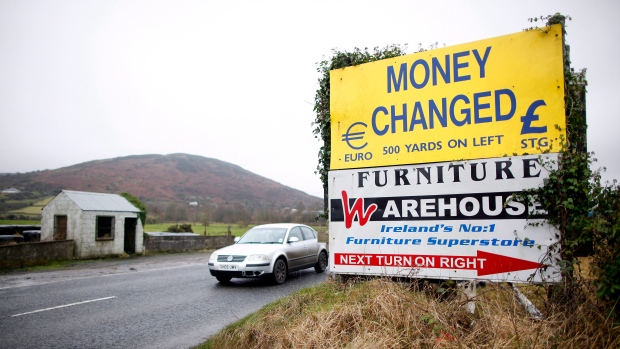 A motorist crosses over the border from the Irish Republic into Northern Ireland near the town of Jonesborough, Northern Ireland, Monday, Jan. 30, 2017. , The Canadian Press

U.K. Prime Minister Boris Johnson made his first public attempt to renegotiate the Brexit deal by telling the European Union he wants to explore different ways to prevent a hard border on the island of Ireland.

In a letter to European Council President Donald Tusk, Johnson said he wants to replace the so-called backstop solution contained in the deal with a “legally binding commitment” not to build infrastructure or carry out checks at the frontier between Northern Ireland and the Irish Republic, as long as the EU promises the same.

The backstop, the most contentious part of the Brexit deal, would keep the U.K. following EU customs and many other trading rules indefinitely unless it’s superseded by a trade agreement that also prevents the need for controls or checks along the Irish border.

The EU has said the deal must include the backstop as a permanent guarantee and won’t renegotiate.

Johnson said the two sides must look at other ways to keep the border free of checks and wants a commitment in the deal “to put in place such arrangements as far as possible before the end of the transition period,” which could be as early as the end of 2020. A transition period will only apply if the U.K. leaves with a deal.

However, Johnson’s letter doesn’t set out what the arrangements should be, and acknowledges there “will need to be a degree of confidence about what would happen if these arrangements were not fully in place at the end of that period.”

Johnson made the removal of the backstop from the deal -- agreed between Johnson’s predecessor, Theresa May, and the 27 other EU governments in November but not approved by the British Parliament -- his key pledge on becoming prime minister last month and has said if the EU doesn’t comply, the U.K. will leave the bloc on Oct. 31 without a deal.

“Time is very short,” Johnson said in his letter, published on the government’s website late Monday. “But the U.K. is ready to move quickly, and given the degree of common ground already, I hope that the EU will be ready to do likewise.”