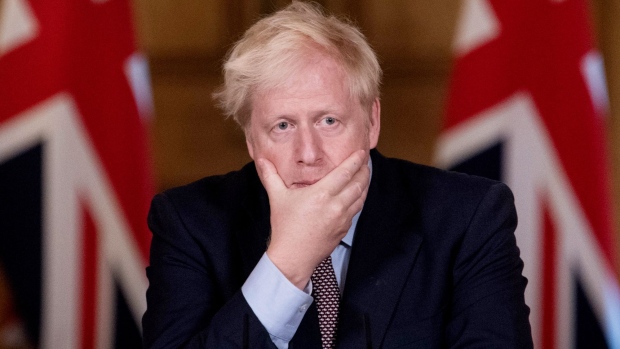 LONDON, ENGLAND - SEPTEMBER 9: Prime Minister Boris Johnson attends a virtual press conference at Downing Street on September 9, 2020 in London, England. As from Monday September 14, people in England will only be allowed to socialise in groups of six or less people following the announcement from the Prime Minister. This is to help curb the recent rise in Coronavirus cases. (Photo by Stefan Rousseau- WPA Pool/Getty Images) , Photographer: WPA Pool/Getty Images Europe

Prime Minister Boris Johnson said the U.K. does not have enough capacity to cope with demand for coronavirus testing and promised to set out measures to prioritize resources soon.

“Demand has massively accelerated in the last two weeks,” Johnson told a committee of members of Parliament in London Wednesday. “We don’t have enough testing capacity now. In an ideal world I would like to test absolutely everybody who wants a test.”

Johnson is battling criticism that his administration has failed to set up a reliable COVID testing regime, six months after the lack of one forced him to lock down the country, delivering a severe hit to the economy.

Johnson blamed the surge in demand for virus tests on people trying to prove they didn’t have the disease so they could return to normal life. “That is perfectly reasonable and I understand why people are doing that but the advice and the guidance is that people should seek a test not in those circumstances but when they have symptoms,” he said. The premier said the government would release the list of groups who would get priority for tests “very shortly.”

Johnson said the government would continue to be “intensely creative” in the help it provides for businesses and workers who suffer hardship as a result of the pandemic. The government will continue to apply the same “imagination” that produced the furlough program, he said.